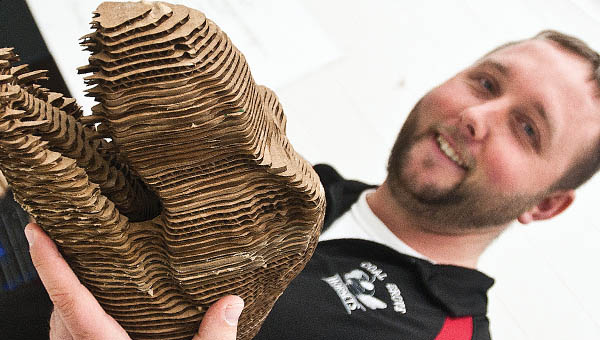 “The cool thing about this classroom is that we have a lot of technology that not a lot of schools have, especially in this area,” Waller said. “Within this classroom, students gain a lot of hands on experience that a lot of other students aren’t going to see.”

Waller said that the two liquid cooling supercomputers were built by students the past two years and that each year they try to build a liquid cooling computer because that’s the direction technology is going. The 3D printer was purchased last summer so this was the first year that it was able to be used, and the school has only had the laser cutter for a few weeks.

“Not only do we have all of this stuff, but the students are able to use it,” Waller said.

Matthew Camp, a junior, said the classes Waller teaches give a basis of all computers.

“When I first came into this class, I didn’t know a lot about computers,” Camp said. “My brother graduated from here last year and now does IT in the Navy and I plan on going to the Navy after high school. He learned from this class and all of this helped him in the long run. We’re getting the knowledge in this class that we never would have gotten without it.”

Waller said Dawson-Bryant is a CompTIA authorized academy and the students have the opportunity to get real world certified by being able to take the A+ and Network+ exams for computer repair and computer networking respectively if they have at least a B in his class.

“The students here have the chance to take these exams for free,” Waller said. “The exams basically say that you have learned the material and some colleges even take the exams as courses that they then don’t have to take.”

This is the end of Waller’s seventh year teaching at Dawson-Bryant, and he said every student who has taken one of the CompTIA exams offered has passed.

With all of the new technology, the school will start doing more in house, as Waller said that awards and engravings will be done using the laser cutter instead of going elsewhere.

“I’m excited for our students to live in their imaginary world,” Waller said.

A Perry County company has gotten the bids to do a total of 15 miles of county and township roadways... read more