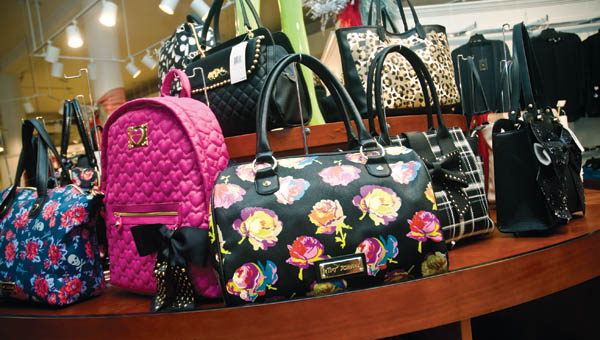 Corbie, a department store named after Stull, sits on the corner of 17th Street and Winchester Avenue in downtown Ashland in a building that is more than 100 years old.

Corbie Stull has always had a love for department stores.

“When I was young, my mom and sisters loved to go shopping,” he said “They would always take me along with them, so I was around them a lot.”

Stull was a hairdresser by trade. He started selling earrings in his beauty shop 30 years ago, and toward the end of the 1990s, he started selling more gifts and things at the shop, he said.

Stull went to the University to Kentucky to be an architect when he was 17, but ended up switching to accounting.

“I quit my senior year at Kentucky to go to beauty school in 1970,” Stull said. “Back in the ‘80s, I went back to school to get my bachelor’s degree in accounting from Ohio University Southern. That has ended up really helping me out.”

Corbie, a department store named after Stull, sits on the corner of 17th Street and Winchester Avenue in downtown Ashland in a building that is more than 100 years old. It is also Ashland’s first fireproof building and still has the original elevator in it, which is actually one of the safest in the state.

The building was built for Ogden Hardware, and before that, a mansion sat on that corner, which was later moved to the corner of 16th Street and Central Avenue. Ogden Hardware closed after the Depression.

Dr. Charles Parson’s, who had Parson’s Department Store in the building that is now the Highlands Museum, acquired the building and turned it into a furniture store that lasted about 70 years.

“When I acquired the building, I had to remodel it, although it’s not finished yet,” Stull said.

Corbie opened in October to combine his two stores in Russell into one.

“People have told me I have an eye for fashion,” Stull said. “A lot of my inspiration comes from high-end department stores across the country. I have read a lot about designers and department store founders. I’ve also learned a lot about clothes just by going to Goodwill over the years and studying on my own.”

Stull likes the old-fashioned feel of some department stores across the country, and wanted to replicate that at his store.

“I have a love for old-fashioned merchandising. The atmosphere reminds people of New York City,” he said. “It kind of takes them out of where they are. We have a doorman for security and pride ourselves on great customer service. We do things that you can’t get in a lot of stores today.”

It’s a high-end atmosphere but it doesn’t have the high-end prices, he said. Stull’s window displays are also something that he loves to do.

“When people take pictures of the window displays and compliment on them, it really means a lot to me,” Stull said.

The main floor contains the women’s section, jewelry, handbags, contemporary, or juniors, make-up, perfume and a seasonal section. The lower level is the men’s section that has a variety of styles. It also contains the discount section, which has been expanded twice since opening, Stull said.

The second floor is the variety floor. Sections include lingerie, baby and toddler, boys and girls, formal wear, a section just for the University of Kentucky and shoes.

The third floor of the store has gifts, home décor, decorative accessories, outdoor garden items and a Christmas department that is open all year-round.

The building has a fourth floor that is used for storage now, but Stull has plans to make it part of the store.

“We are planning on taking the boards off of the windows up there, so that there is a view of the river,” he said. “I want to leave the brick and ceiling exposed as well.”

The plan is to make the fourth floor a “Kentucky Proud” section, which would contain merchandise all made in Kentucky, including M.A. Hadley Pottery and Louisville Stoneware goods, both from Louisville.

There will also be a restaurant in the back of the main level of the store.

“I’m planning on opening the restaurant sometime in the spring,” Stull said. “I want to model the dining room after the art in Bergdorf Goodman, one of my favorite stores in New York City. It will be an old-fashioned dining room with white table cloths.”

There is a large garage in back of the store, which will be turned into the kitchen and there are plans to redo the outside and make a patio.

“There’s always going to be malls, but I think that there is a need for different styles of stores,” Stull said. “People are shocked at what I’ve done, but the response is overwhelming. I feel like God led me to do this.”

Cincinnati’s Tony Cingrani pitched well in relief but the Reds lost 5-2 on Sunday as the Chicago Cubs swept the... read more