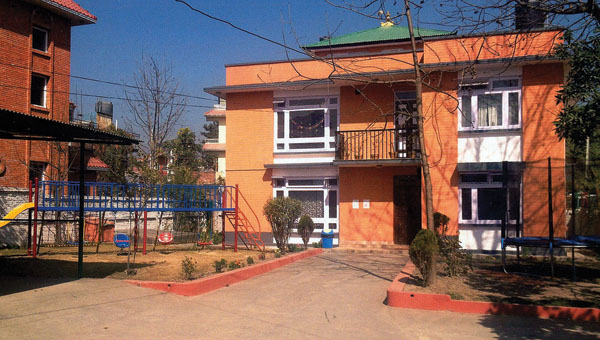 The school in Nepal that former Dawson-Bryant educator Eric Holmes, of Coal Grove, was involved with.

COAL GROVE — When former educator of 20 years as both a teacher and administrator, Eric Holmes, of Coal Grove, was asked by his college roommate’s wife to help start a school in Nepal, he accepted the challenge that the opportunity gave him.

“I met my college roommate, Di Walker, in 1985 at Muskingum University, and we’ve kept in touch ever since,” Holmes said. “After college, he went back to his home country of Nepal and took a job with the Nepalese government as director of the tourism department. Because of that, he’s been able to travel to and from the United States. His wife has worked in different schools for about 10 years. She knew that I was in education in the United States and she asked me to come there to help start a school.”

Holmes said that the educational system is a lot different in Nepal than in the United States and that there are more privately run schools than public schools. The school that was started is a pre-K primary school that will be built on each year, Holmes said.

Holmes went over to Nepal to help start the school on Feb. 28 and came back March 19. During that time, there was also an open house for prospective students and their families to see what the school had to offer.

“I was more of a public relations person,” Holmes said. “I did all of the interviews and hired a teacher, cook, groundskeepers and helped determine the curriculum. Walker’s wife is going to be the principal.”

The school’s curriculum is taken from the United Kingdom, Holmes said.

The school is located just behind the United States Embassy and was already established, so it did not need to be built.

The recent earthquake in Nepal has left much of the country devastated, although Holmes said everyone he met while over there is OK. The only damage to the school was the wall around it collapsed.

“Structurally the building is fine and no one was at school during the time of the earthquake,” Holmes said. “It’s ironic that after 30 years, I was able to travel there this year and then this happens. I planned on going back once a year, but now with the earthquake, I’m not sure when they’ll start school back up.”

The school has 24 preschoolers, Holmes said. Although he does not know when the school will reopen, he said he is excited to continue being involved with the project.

“The reason for me going was to help with the administration portion of the school. I’ve been working in the private gas pipeline industry for the past five years and I’ve missed education,” Holmes said. “This was an opportunity to visit my old college roommate, meet his family in person and offer any help that I could with the experiences that I’ve had.”

A former Lawrence County Jail inmate has filed a lawsuit against sheriff Jeff Lawless and deputy jailers, saying she was... read more