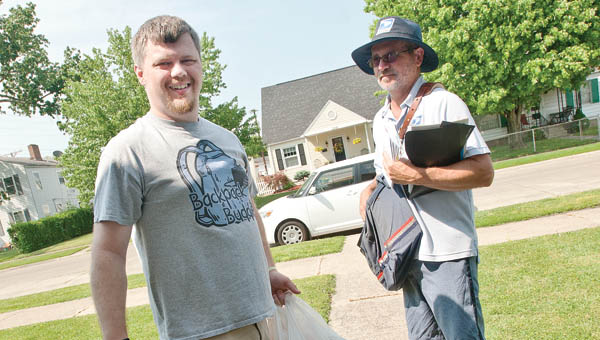 Ryan Munion, left, and Don Johnson, right, are on foot patrol as they deliver mail and pick up donated food items for the nationwide Stamp Out Hunger Food Drive Saturday in Ironton. The drive is in it’s 23rd-year and donated items will be split between BackPack Buddies and the local city mission.

Not only were mail carriers delivering mail on Saturday, but they were collecting food items as part of the Stamp Out Hunger Food Drive as well.

The countrywide food drive is sponsored by the National Association of Letter Carriers, the United States Postal Service and the United Way and the food collected in Ironton and the rural Ironton area benefitted both the city mission and Backpack Buddies program of the Campbell Chapel Freewill Baptist Church.

“It’s a good cause that’s been going on for a number of years,” Randy Shaw, customer service supervisor at the Ironton Post Office, said. “From what the carriers have said, they’ve been doing pretty well. Usually they collect a good amount of food to help out the shelters around here.”

“We had a great day and a great group of volunteers,” Hunt said. “We love working with the postal service. They’re great. We had a great time and it was an awesome day.”

CINCINNATI (AP) — Revelers may soon be able to carry open containers of alcohol legally Ohio — and not just... read more