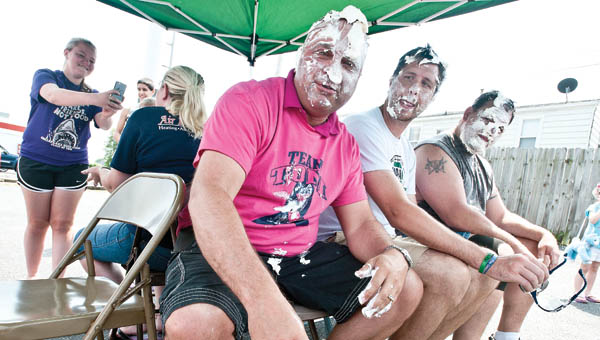 Freddie Hayes, Adam Alt and David Davenport, left to right, take one pie in the face after another.

Team Toni is a non-profit organization that was started three years ago for former Chesapeake High School student Toni Black, who lost her battle with cancer. Team Toni has fundraisers and helps locals struggling with cancer by donating gift cards and Toni kits that include a Bible, prayer teddy bear, mints and a Toni bracelet.

Neil Johnson, one of the organizers of the pie fundraiser, said that he loves making a difference for Team Toni.

“I’m just a caring person that wants to help out and make people laugh,” he said. “The pie idea seemed perfect.”

Johnson is also known as the Team Toni “Tutu Boy” for wearing a tutu to represent Team Toni at 5K races after getting so many likes on Facebook.

“I’m involved in anything Team Toni, or I at least try to be,” Freddie Hayes said. “I think it’s a great cause and I’ll do anything they need me to.”

Ryan Munion, left, and Don Johnson, right, are on foot patrol as they deliver mail and pick up donated food... read more