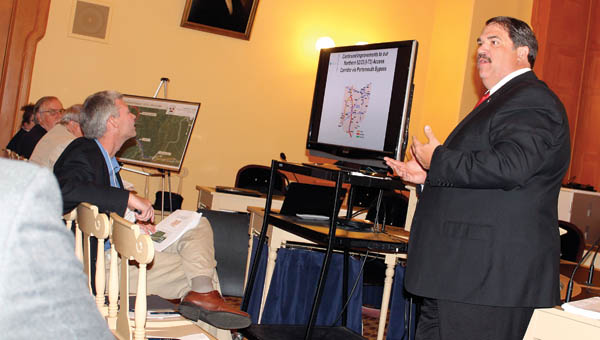 Lawrence County Engineer and co-chairman of the Lawrence County Transportation Committee, Doug Cade, goes over the updated plans and proposals regarding certain roads and intersections in the county Tuesday at the statehouse in Columbus.

This is just one of the areas that was talked about at the transportation session of the 29th annual Lawrence County Legislative Day Tuesday at the Statehouse in Columbus.

“The state usually only looks at the top 50 problem areas on the highways,” Cade said. “We are taking the need for the intersection of County Roads 1 and 15 on U.S. 52 because it’s not as high of a priority for the state.”

County Road is the fifth highest accident intersection in Lawrence County. Increasing commuting patterns within the Tri-State, the anticipated increase of truck traffic from the opening of the bottleneck with the Portsmouth Bypass and the recent expansion of McGinnis, Inc. all support the investment, Cade said.

The next area where updates are proposed is the intersection of U.S. 52 and Solida Road near The Point industrial park. The proposed interchange involves roundabouts on each side of the U.S. 52 overpass which would improve both traffic operations and safety along Solida Road.

The last proposed improvement is to County Road 140, or Walmart Way in South Point, which will be fixed with a roundabout.

“This is the No. 1 county road for accidents,” Cade said. “I met with Wendy’s, Speedway and Sam’s Club and they all wanted to see a roundabout.”

Cade said that he sought the opinion of the businesses around that area because 30 percent of the county’s sales tax revenue comes from there.

“Our region was founded and has thrived on transportation,” Kline said. “Transportation is key as well as the logistics that we have in the area. It’s not just important for Lawrence County, but the whole Tri-State.”

COLUMBUS — Putting a school inside the proposed health and wellness center at The Point industrial park is on the... read more