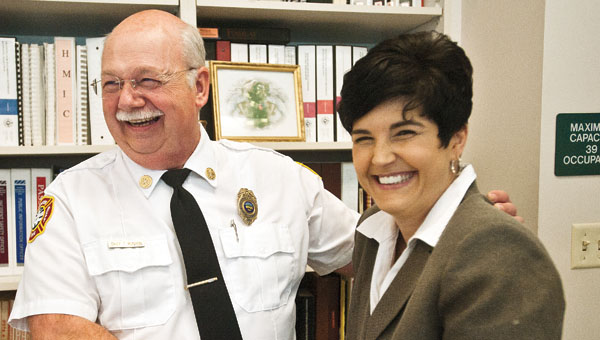 Chief Tom Runyon, of the Ironton Fire Department, with Katrina Keith during his retirement party celebration Tuesday. Runyon has served with Ironton for over 28 years.

Ironton Fire Chief Thomas Runyon has decided to hang up his uniform after 28 years at the Ironton Fire Department and 44 total years of fire service.

Runyon had all positive things to say about the city of Ironton and its citizens.

“I can’t say enough about the city of Ironton. The citizens have been great to work for and all of my colleagues have done a wonderful job,” Runyon said. “It’s a good city to work for and a small city so there is extra time to deal with the citizens.”

Blankenship presented Runyon with a plaque and the State Fire Marshal’s Office presented him with a certificate for his service.

“My wife has dealt with me being gone for weekends, nights, holidays, dinners, everything,” Runyon said. ”One of the things I’m going to do is give her my attention now.”

Opening ceremony at 6 p.m. Friday   For the past several years, hundreds of American flags have dotted the grassy... read more