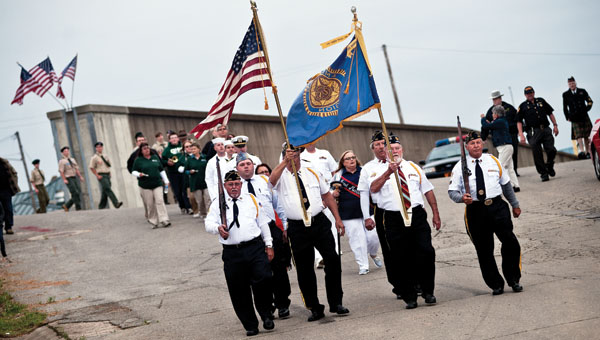 The only sound as they marched to the riverfront was the lone beat of a drum like the pounding of a knell. Veterans, active servicemen and those who came to honor them silently walked down Center Street to the boat ramp.

There an audience had gathered Thursday night to participate in Navy Night, the first event in the five-day Memorial Day weekend, a tradition for many in Ironton and beyond.

Then Boy Scouts from Troop 106 demonstrated the flag folding, a ceremony that occurs during the burial service of a member of the military.

“The flag is folded ceremonially for those who have paid the ultimate price,” said Scout Leader Dr. Dave Lucas, wearing the McClaren plaid.

It is a tradition for Troop 106 to participate in Navy Night.

“We are here to show respect for God, for country and for the youth movement,” Lucas said.

Keynote speaker for the night was Lt. Cmdr. Michael Raymer of the U.S. Navy, who came to Navy Night to “recognize our fallen American heroes.”

“The sacrifice made by sailors can’t be measured, but can be remembered,” he said. “They are here to protect. Without their commitment, the Navy and the nation would not be what it is today.”

Then VFW Post 8850 presented the gunnery salute followed by the playing of taps by the post’s bugler and “Amazing Grace” on the bagpipes. Troop 106 then marched to the river to place the memorial wreath into the Ohio River as Marathon Marine Transportation performed a water spray salute.

The ceremony concluded with the Navy Hymn performed by the Ohio University Community Band, that had performed patriotic music throughout the evening.