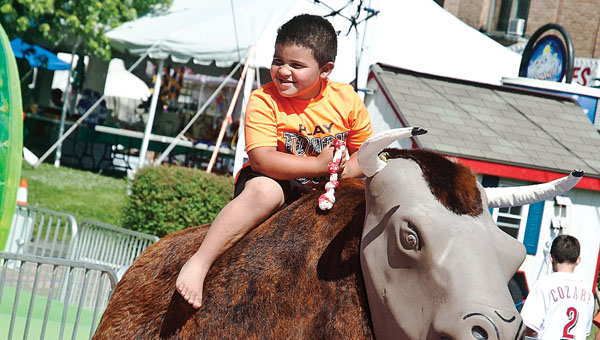 Five-year-old Jacarr Coleman attempts to ride the bull during the annual Charity Fair sponsored by the Ironton Catholic Schools.

St. Joseph High School Class of 1992 graduate Chris Holtzapfel has helped out with the Catholic Charity Fair every year since he was a seventh grader at the school and said St. Joe has been a part of his family for generations.

“It’s all about helping out the Catholic community and making sure this school keeps going for future generations,” he said. “My grandmother, dad, myself and my four sisters graduated from here and I have a daughter that’s graduating this year. My dad helped out with it and cooked every year and I would always help him out. A few years back when he stopped working the fair, he passed the tongs over to me.”

The fair features live music, food and raffles, and for children there are games, inflatables and other activities such as a small mechanical bull and a bungee jump.

“It’s our biggest fundraiser of the year,” Chris Monte, one of the event organizers, along with Cara Clark and Sissy Clyse, said. “All of the money raised goes into the general fund for the operating of the schools.”

Monte said the fair has been going on at the school for about 30 years.

The fair continues today until 10:30 p.m. and Monday until the end of the Memorial Day parade.

Don’t forget those who sacrificed all