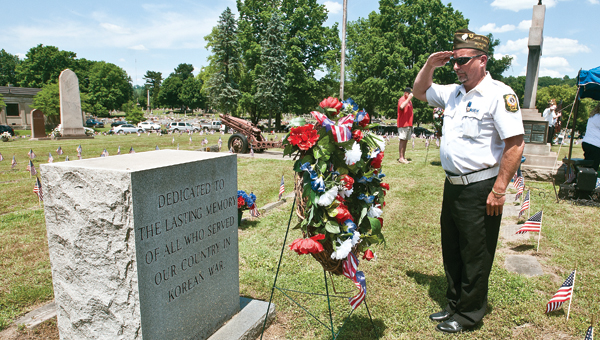 Dave Johnson with the VFW Post 8850 Honor Guard performs the placement of the memorial wreaths during the Veterans Memorial Service on Sunday.

Paying tribute to the true meaning of Memorial Day was what a group of about 50 did as they came to at Woodland Cemetery for the annual Veterans Memorial Service at Soldiers Plot on Sunday.

“For 147 years the citizens of Lawrence County have gathered to pay homage to those committed to the defense of this great nation,” said Mark McCown, who acted as master of ceremonies. “This service is the true purpose of Memorial Day to honor those who sacrificed everything.”

McCown’s opening remarks were followed by an invocation by Brother Chad Pemberton, then the posting of the colors by Ironton VFW Post 8850. After the pledge of allegiance Lori Donohue performed the national anthem on the keyboard.

Keynote speaker for the Woodland service was Commander Robert Webb of the U.S. Coast Guard. The Savannah, Georgia native currently has a posting in Huntington, West Virginia.

Webb elaborated on the theme of the day saying, “Memorial Day is not about celebrating the beginning of summer. It is a solemn day for contemplation. Where would you be without the sacrifices of these men and women?”

All service members share the same characteristics of courage, pride, determination, selflessness, dedication to duty and integrity, he told the audience.

“A person can’t help but feel awed in the midst of these patriots,” Webb said.

And despite the dangers of war, there remain those who want to protect their country.

“More Americans are stepping forward to say ‘I’m ready to serve,’” he said.

Webb also lauded the families of service men and women for their call to duty.

“You have carried the burden of family responsibilities,” he said. “You too have sacrificed for us to enjoy the freedoms of today.”

The service concluded with the placement of memorial wreaths and the gunnery salute and playing of Taps.

Students from the 2015 South Point High School graduating class take a selfie before the start of commencement exercises on... read more