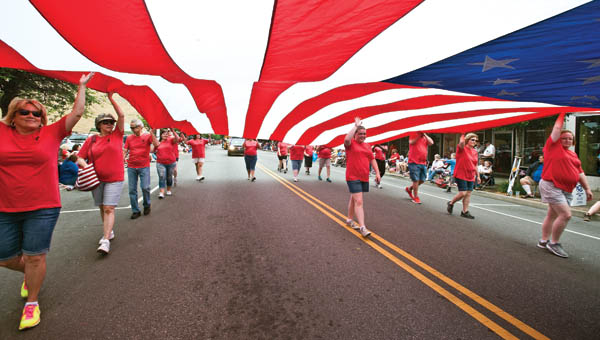 Members of Our Lady of Bellefonte Hospital carry an American flag.

Red, white and blue were abundant as thousands lined the streets of downtown Ironton to see the longest running parade in the country.

“This is Memorial Day. It’s a time when we remember all those who sacrificed their lives for our country,” U.S. Rep. Bill Johnson R-6, said. “There’s a great crowd, great weather and lots of veterans. I’m very humbled and honored to participate and be a part of such a great day.”

Wilson was at the parade with a group from Campbell Chapel Freewill Baptist Church.

With various floats, bands and groups making their way through the parade procession waving and passing out candy to the children, the excitement and enthusiasm of the crowd was strongly felt.

“The floats are great and the bands are great,” Ironton resident and Vietnam veteran Anthony Nance said. “I really like the parade.”

“The kids love it and they really look forward to coming,” he said. “It’s always an honor to honor those who served.”

The parade committee plans and works on putting the parade all year long to make the event what it is.

“When you work on this for months and months and months and finally see it come together, it’s very rewarding,” Lou Pyles, of the parade committee, said. “We had great weather, everyone worked hard on it and it seemed like everyone was happy. The parade brings a lot of people to our town and it’s a good positive for our town.”

Awards were given to the floats of the parade with the Ironton Farmers Market claiming Best Theme, Mount Calvary Freewill Baptist Church taking home the Grand Marshal award and Marathon Petroleum getting the Parade Commander Award. The Past Grand Marshal award was given to Mamre Missionary Baptist Church while the Symmes Creek Restoration Committee was awarded the Youth Float award.Tri-State Baptist Temple won the Civic Float award.

Cincinnati third baseman Todd Frazier connects on a two-run homer in the first inning of Monday’s game against the Colorado... read more