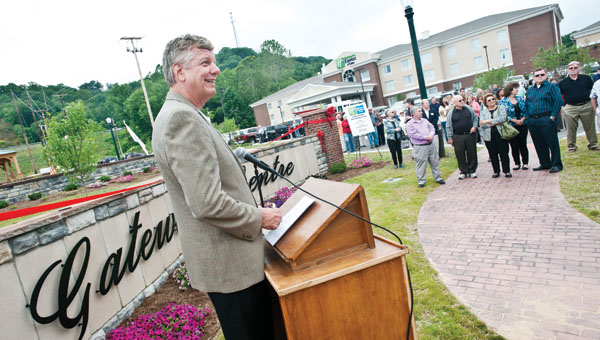 Mike Holtz, representative with Holiday Inn Express and Suites, speaks to the crowd during the Gateway Centre Dedication Tuesday in Ironton.

Community members, city and county officials and representatives from Holiday Inn Express and Suites and Frisch’s Big Boy were at the dedication and ribbon cutting of the Gateway Centre on Ninth Street Tuesday evening.

Executive director of the Lawrence Economic Development Corporation Bill Dingus gave a welcome and brief background of the project to the crowd before Susan Taylor sang the national anthem. The program began with various speakers describing how the Gateway Centre came together.

“Everything came together,” Ironton Mayor Rich Blankenship said. “With the people that are involved, the Holiday Inn and Frisch’s, it all came together and we’re standing here today to see this great development. We certainly appreciate that and we convinced the Holiday Inn and Frisch’s to believe in the city of Ironton to come here and put their businesses here and hire our local citizens.”

The Holiday Inn and Frisch’s Big Boy have so far brought a total of 70 full-time jobs to the community.

Others speaking before the ribbon cutting were Jason Wilson, director of the Governor’s Office of Appalachia, with remarks from the state, Carol Boll, Ironton Ranger District tecreation team leader, Jim Kratzenberg, one of the owners of Frisch’s Big Boy, president of MPH Hotels Mike Holtz, Lawrence County Commissioner Les Boggs and Ralph Kline, assistant executive director of the CAO.

“I’d like to thank all of you and the visitors that you bring to the city,” Holtz said. “It’s because of your use of the hotel, your patronage at the hotel that we’re going to be successful here. And when we’re successful the town is successful and more things grow.”

All were welcomed into the hotel for food, refreshments and a tour after the conclusion of the dedication and ribbon cutting.