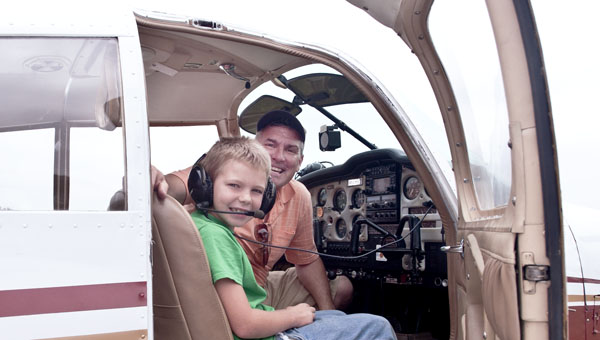 Eight-year-old Colton Noble gets ready for a ride in the sky with pilot Fred Hitchings during a community fly day on Saturday at the Lawrence County Airpark.

Planes were coming and going all day at the Lawrence County Airpark Saturday as the Tri-State Pilots Association (TSPA) hosted the spring session of its biannual fly day.

“We do this twice a year. Once in the late spring or early summer and once in the fall,” Joey Johnson, president of the TSPA, said. “We do this mainly to help pay for some of the expenses to operate the airport and also to promote aviation to the public.”

Guests took off in Cessna 147 and piper airplanes, which go about 130 mph, and flew over some of the Tri-State as part of the ride before heading back to the airpark.

“The plane was rocking when we landed and how we hit the ground was shaky, but it was really fun,” Jessica Tomblin, 12, of Barboursville, West Virginia, said when she got off the plane.

“That was my first time flying in a plane, but I would do it again.”

J.T. Shell, 11, of Huntington, West Virginia, said he had the time of his life when he got off the plane.

“It was really fun. You feel like you’re just weightless,” he said. “You can see everything up there, all the houses, pools, small lakes and where they’re building stuff. It was awesome.”

Johnson said although the air principles are the same between their planes and large commercial airliners, they differ in that the small planes fly at a lower altitude where one can see more, such as recognizable landmarks, and that large airliners travel around 400 mph.

Each airplane ride lasted about 20 minutes and flew over Huntington and Proctorville before going landing back at the airpark.

“A lot of the children and even the adults have never flown before,” Johnson said. “This is a good chance for them to experience flying in an airplane.”

FRA hasn’t notified railroads of waiver   Nearly a month after Ironton residents should have been relieved of loud train... read more