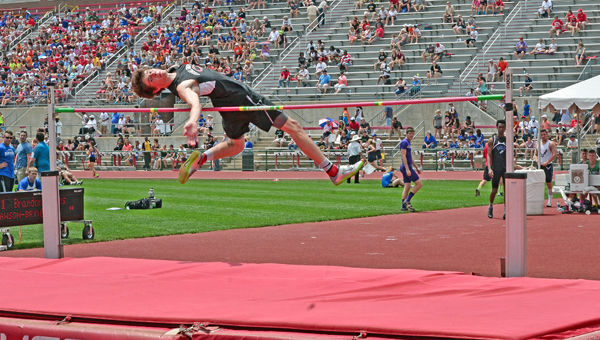 COLUMBUS — A quick look at the Division III high jump field and everyone looked about the same.

Most of the jumpers were tall and lanky. They were athletic. No one seemed to have an advantage over the others.

Having won the Division III high jump championship a year ago at the Ohio High School Athletic Association state meet, Adkins was carrying a little something extra.

“I came in with more confidence,” said Adkins who cleared 6-foot, 8-inches to win his second straight state title.

“I was still nervous, but I knew I could do it if I did my best. It’s great. I’m blessed,” said Adkins.

The results of this year’s meeting had some similar results. Adkins won last year’s event by clearing 6-8 as well. Among the field of contestants was last year’s runner-up Ben Olewiler of Ashland Crestview.

“I felt good, but I didn’t do as good as I wanted to,” said Adkins. “But winning’s good enough.”

Brian Hall of Adena was second at 6-6, finishing ahead of Blake Stephens of Anna and Timothy Trawick of Piketon who also cleared 6-6 but the trio went 3-4-5 based on misses.

Adkins — who set the district record two weeks ago ay 6-10 — had only one miss during the competition. He attempted 6-10 after locking up the title but failed to clear the height.

“Brandon’s a special kid. He’s got great athletic ability. A lot of kids would be nervous and be scared of (trying to repeat). But he came in with a good mind about it and he was able to go out and do what he does. He’s a great young man,” said Lucas.