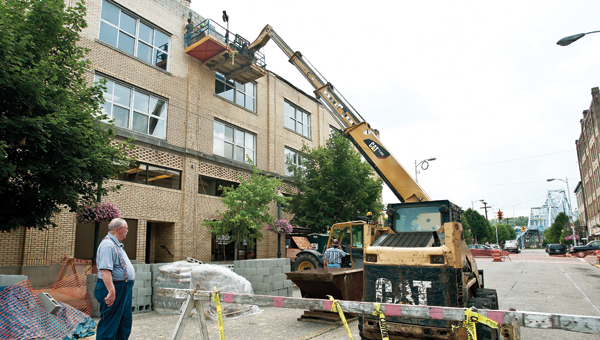 Traffic is blocked on Vernon Street, between South Second and Third, while workers from Southern Ohio Salvage work on the Ironton City Center on Thursday.

Work could take up to 1 month

Crews from Southern Ohio Salvage and Contracting are working on repairing the Ironton City Center’s parapet wall. Mayor Rich Blankenship said that he was told it should take three or four weeks to complete depending on weather.

“The parapet wall was in horrible condition,” Blankenship said. “The wall was leaning and mortar was coming out of the bricks. It was in a condition that we couldn’t let go any longer and it’s finally getting the repair it needs.”

“We want to keep the city building in good shape for the public,” Blankenship said. “This is something that was in desperate need of repair.”

After approximately two years of wondering and debating, the $250,000 check from LM Associates from the transfer of the Sherman... read more