Working to protect its students 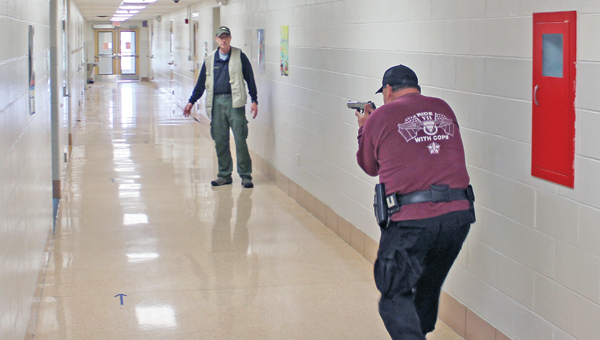 PEDRO — The goal is simple: Keeping the students safe. That is why the Rock Hill School District armed its staff about three years ago and why the district went public with it about a year ago.

And that is why staff took time out from summer break more training to make sure if the worst scenario happened, they would be prepared.

“If we had an active shooter, our concern is response time,” Wes Hairston, Rock Hill superintendent, said. “We do have people who are incredibly well-trained.”

That training continued Wednesday and Thursday from experts from the Tactical Defense Institute who put staff into situations that resembled real-life as possible. In keeping with the district’s policy, the names of those personnel who are authorized to use arms on the school campus is kept as privileged information.

Benner said arming staff in schools has been a long-held dream.

“I’m all for safety to protect children,” he said. “Unless we have armed people, you will lose people. The best way to intervene is force against force. We want to give them a chance to win, instead of just getting killed.”

The two days of training was funded by the Buckeye Firearms Association, whose president defends the idea of schools having armed staff on its premises.

“I want extreme safety,” Jim Irvine, said. “Is it too extreme building a building according to the fire code. I care about the kids. Who doesn’t think safety of children is important?”

Because of fire codes there has not been any loss of life in school fires for the past decade, he said.

“It is a sad fact that today we need guns in school to protect students and staff,” he said. “Most schools in Lawrence County are outlying schools. It takes a while for law enforcement to respond so time matters. If the school personnel has ability to dismiss the threat, that is important in order to save lives.”