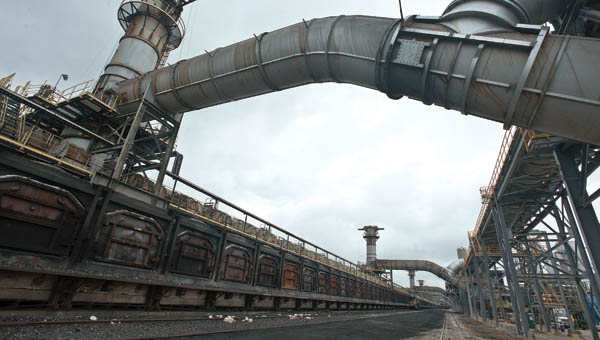 View of the coke ovens at the SunCoke plant in Haverhill.

HAVERHILL — In a 24-7 operation about one-tenth of the coke produced by SunCoke Energy worldwide comes from its local plant in Haverhill, or 550,000 tons a year locally.

Split up into two sections, the plant serves both AK Steel in Ashland, Kentucky and Dearborn, Michigan and ArcelorMittal in Cleveland and Harbor, Indiana.

The first section of the plant, Haverhill 1, began operations in 2005 and serves ArcelorMittal while Haverhill 2 opened in 2008 and serves AK Steel.

“There are 200 total ovens in the whole plant — 100 ovens and a quench tower for each section,” Skipworth said.

As coal arrives at the plant, it is first placed into two large storage piles before going into a large dome for crushing. Then it hits the ovens that reach temperatures up to 2,600 degrees Fahrenheit. There the process of becoming coke takes place. Coal must be crushed down to 1/8 inch before entering the ovens.

Inside the ovens, several transformations of the coal take place to form the final coke product.

First, a layer of plastic is formed that agglomerates or collects the small particles; volatile matter of tars and hydrocarbons start to evolve; the plastic agglomerated mass solidifies into large pieces and finally the coke is stabilized into the solid product.

From the ovens, the coke is transported to the quench towers where it is cooled off before undergoing its final step where it is broken up into the smaller pieces before being shipped out.

Although the process has changed over the years, making coke has been around for centuries. The first coke was made just by using mounds of coal, sometimes with dirt, that held in the heat before beehive ovens were used to recover heat.

Thousands of beehive ovens were built and operated throughout Pennsylvania, West Virginia, Alabama and Tennessee. However, the first ovens used in coke making sent heat waste and pollutants back into the atmosphere.

Following the beehive ovens, the use of slot ovens became more popular because of their ability to recover the heat instead of letting the heat waste pollute the air. Currently, this is still the way most coke is made worldwide.

What makes SunCoke different from other coke making companies is that SunCoke utilizes its heat waste, Skipworth said.

“The Haverhill plant is the first plant within SunCoke to do everything. We take coal in, make coke and deal with heat generators,” he said. “Our plants prior to Haverhill just made coke, but didn’t deal with the hot gas.”

Approximately 150 employees work at the SunCoke Energy’s Haverhill plant with about 50 contractors employed, however the number of contractors varies depending on what’s going on at the plant.

SunCoke Energy is headquartered in Chicago and has plants in Indiana Harbor, Indiana, Granite City, Illinois, and Middletown other than its Haverhill plant in the United States, and Skipworth said that SunCoke would like to build another plant in South Shore, Kentucky. The company has one international plant in Vitoria, Santos Espirito, Brazil.