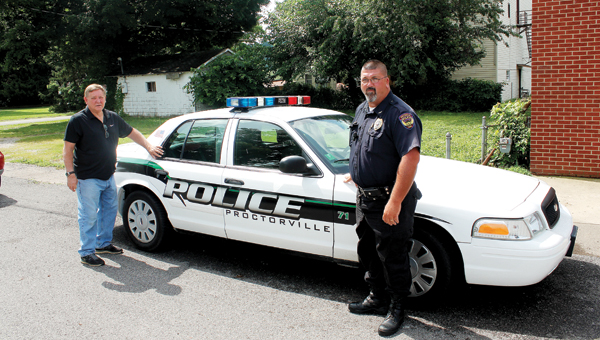 PROCTORVILLE— A new police cruiser was added to the Proctorville Police Department back in May from the surplus of the Ohio Department of Administrative Services to replace one of the department’s old cruisers.

“Both transmissions went out in the two old cruisers that the department had. One in 2013 and one in 2014,” Proctorville Mayor Rick Dunfee said. “Both were repaired, but the one broke down again, so we had to get another one to replace it.”

The department’s new cruiser is a 2012 Ford Crown Victoria.

“The village took out a loan and city council implemented a fee on all tickets for the replacement of cruisers,” Dunfee said. “This will pay for the new cruiser.”

Dunfee said that when the department got the new cruiser, it decided to change the car’s look. New decals were ordered and another color of paint was added.

“The old cruisers were just black and white,” Dunfee said. “Now, they are green, black and white. We wanted to match them with the Fairland school colors.”

The radios and lighting were just transferred from the old cruiser to the new one, Dunfee said.

“The new look of the cruisers makes us look a lot better than before,” Proctorville Police Chief Bill Murphy said. “We’re very glad to be able to have this cruiser with the department.”