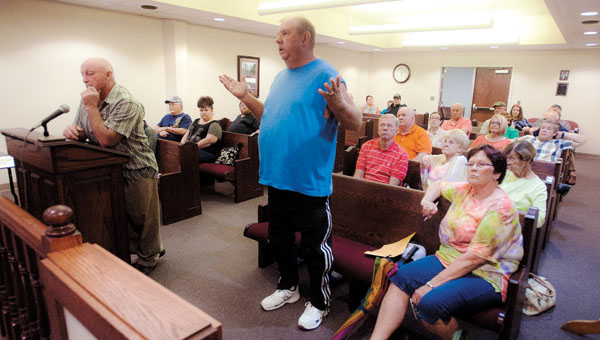 Cliff Back addresses Ironton City Council members during a public hearing Thursday about the rezoning of the former Whitwell Elementary School. Surrounding neighbors are not in favor of the rezoning.

Neighbors to the proposed Whitwell School apartment complex came out in full force to voice their objections as Ironton City Council nears making a decision on a needed rezoning for the project.

A final decision on developer and Whitwell School owner Jack Hager’s request to rezone the former school from a Residential-2 to a Residential-3 could be made as soon as the next council meeting.

That change is needed for Hager to move his project forward.

Previously tabled, Ordinance 15-17, rezoning the site from an R-2 to an R-3 district, was un-tabled Thursday evening. That followed a public hearing where neighbors spoke out against Hager’s plan to turn Whitwell School into a 25-unit apartment complex for senior citizens and veterans. The ordinance was already unfavorably recommended by the planning commission.

“There are zoning laws in the city, and I expect those to be enforced,” neighboring resident Mike Pearson said. “We already have zoning laws and we need to abide by them.”

“Zoning helps establish land use, patterns and regulations compatible with the area. That’s what zoning is for,” Pyles said. “This ordinance is unacceptable and the value of our properties would be significantly affected. I believe it has to be for the good of the property owners and neighbors of the zone for the comfort and welfare of those residents and this isn’t for welfare of them.”

Hager said after talking with senior citizens and veterans administration organizations in Ironton and Huntington, he has found a strong need for housing for both groups.

“If Mr. Hager can’t fill 25 apartments with elderly and/or veterans, what will he put in these apartments?” Bonnie Sutton asked. “There’s a lot more to it than just 25 apartments in Whitwell.”

Hager said he doesn’t see being unable to fill the apartment complex with seniors and veterans as a problem, although he has no set backup plan in place.

For those against the project, the issue was more of the location and not wanting apartments in the neighborhood rather than Hager and his idea. Council member Aaron Bollinger said un-tabling the ordinance would be the best option in getting a quick decision. He made a motion to un-table the ordinance so it could have its second reading at the regular council meeting immediately after the hearing. Bob Cleary seconded the motion.

At the regular council meeting, Ordinance 15-17 was given its second reading. Its third reading will be given at the next council meeting July 23 and voted on. With the unfavorable recommendation from the planning commission, it needs six votes to pass instead of four.

Also on the agenda, Ordinance 15-28, providing for issuing bonds by the Ironton not to exceed $136,000 for acquiring a garbage truck passed unanimously after a favorable recommendation from the finance committee. Cleary made a motion to suspend the rules on Ordinance 15-24, amending the annual operating budget for the city ending Dec. 31, and give the third reading by title only. All but Dave Frazer voted yes to suspend the rules. Bollinger made a motion to adopt the ordinance with Cleary giving a second. All but Frazer voted yes. The third reading was given of Ordinance 15-23, approving and adopting the countywide natural hazards mitigation plan prepared by URS Corporation. Craig Harvey motioned to adopt, Bollinger seconded and all voted yes.

After months of hard work, Lawrence County’s 4-Hers and Future Farmers of America will reveal their projects for all to... read more