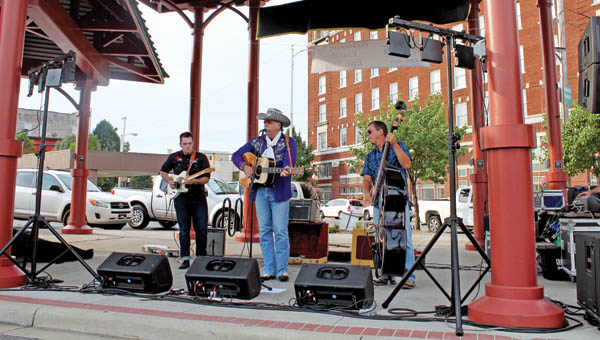 Rob McNurlin performs a variety of music Tuesday evening at the Farmer’s Market as part of the Summer Concert Series hosted by Studimo and Ironton aLive.

“It’s just a big mess of everything that we like,” he said. “Country, blues, gospel, a little bit of everything.”

McNurlin is originally from Westwood, Kentucky, just outside of Ashland, but currently resides in Nashville, Tennessee.

“I started making music when I was 9 years old,” he said. “But I didn’t start making music for a living until the early 90s.”

Performing alongside McNurlin were Les Worley on the stand up bass and Aaron Tatterson on the Esquire guitar.

The Summer Concert Series at the Ironton Farmer’s Market is hosted by Studimo and Ironton aLive, and its sponsors include I Heart Radio, Bob Clyse Chevrolet-Buick-GMC, Phillips Funeral Home, the city of Ironton, Holiday Inn Express and Suites and Our Lady of Bellefonte.

Acting executive director of Ironton aLive, Sam Heighton, said the Summer Concert Series will have three more concerts and wrap up the last Tuesday in August.

Next week’s concert will feature “The Butterfly Effect,” with “The Fugitives” following up on the next Tuesday. Heighton said the act for the last concert is not yet finalized.

Courthouse project may be cut