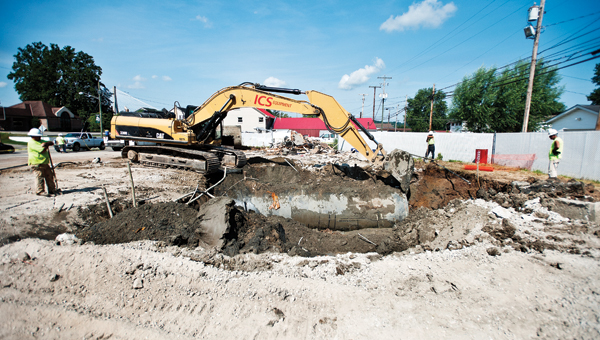 Employees from Petro Environmental take out one of the four fuel tanks at the former Paul’s Quick Serve in Proctorville.

PROCTORVILLE — Four gas tanks were pulled from the ground Wednesday at the Paul’s Quick Serve service station site next to the Proctorville fire station as part of the Lawrence Economic Development Corporation’s plan of cleaning up old station properties.

“We’re trying to clean up some of these properties that no one will clean up because of the risk associated with gas,” director of The Point industrial park Jeremy Clay, of the LEDC, said. “Inspectors are here to witness us pull the tanks out and destroy them, which is required. A lot of people are hesitant to start these kinds of projects because dealing with gas, once you start, you can’t stop.”

Crews from Petro Environmental of Cincinnati were on site to remove and destroy the tanks, as well as have a mobile lab there to test the soil around the tanks.

Clay said testing of the soil determines spillage and contamination, and that all of the earth within one foot of the tanks will be tested.

“What we liked about Petro is that a lot of these places take the dirt somewhere else to get tested,” Dr. Bill Dingus, executive director of the LEDC, said. “This particular company tests it there on site.”

The site is the fourth station cleaned up through the LEDC in approximately the past four years, Clay said. The first was on Charley Creek in Chesapeake, followed by one on Marion Pike in Coal Grove and Third Street in Ironton earlier this year.

Dingus said the results of the testing should be available within the next couple of days, where it will be determined if more work will need to be completed.

“Everything’s gone well, but we’ve not yet heard the final results yet on the leakage,” Dingus said.

Once it is determined that the site is completely free of contaminants and no other developments need to happen, the LEDC will send the results to the state in order to receive an NFA (No Further Action Letter).

“We want to market the site for future entities and hopefully create more jobs for our region,” Clay said.

Dingus feels the same way about the LEDC taking action to clean up these sites.

“It will be great for commercial use,” Dingus said. “Proctorville has a lot of opportunity for commercial development, and we think after it’s clean, it will attract another business and create jobs.”

Municipal races this November will be a combination of new and familiar faces as veteran officeholders vie with political newcomers.... read more