Diamond to play on OCU’s diamond 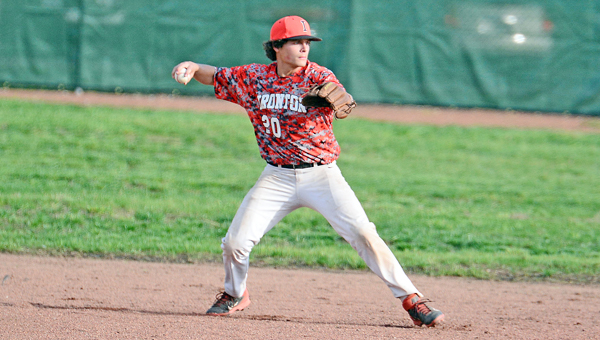 When looking for a college during his junior year, Ironton Fighting Tigers’ senior Luke Diamond came across OCU and saw the two things he wanted more: a degree in ministry and a baseball program.

Diamond talked to Ironton coach Larry Goodwin who got in contact with Trailblazers head coach Grant Reynolds. Diamond made a visit and continued to talk with Reynolds.

“It was a place where I could continue to play ball and get my degree. I felt I had the call from God to be in the ministry,” said Diamond.

Then before his senior season was about to begin, the Ironton shortstop and second baseman made the decision and gave a verbal commitment to OCU.

“Luke is an athletic middle infielder who will have the opportunity to compete to replace graduating senior Trevor Whitesed,” said Reynolds. “He looks smooth defensively and even with a slow start to the season was able to put together a very solid season hitting .370.”

Diamond batted .344 on the season and had a .440 on-base percentage. He had six doubles with nine runs batted in while batting in the two slot.

A versatile player, Diamond played shortstop and second base while also doing some pitching. He was 3-3 as a pitcher with 20 strikeouts in 26 innings and posted a 3.50 earned run average.

Defensively, he only had three errors in 23 games.

“Their senior shortstop graduates and they have a junior at second base. They told me I could compete for starting for the shortstop job my freshman year,” said Diamond.

“Luke’s best qualities will not show up in the stat sheets,” said Goodwin. “He had great leadership on and off the field.

“Luke has a tremendous work ethic. Luke’s intensity during team and individual workouts were contagious to the rest of the team. A good program is evidenced when your best player is also your hardest worker.”

After previously playing in the National Christian College Athletic Association, the Trailblazers step up their competition this coming season as they jump to the NAIA level and will join the Kentucky Intercollegiate Athletic Conference (KIAC).

Diamond is excited to get the opportunity to play against a higher level of competition.

“It’s only going to make us a better program. Hopefully, by the time I’m out of here we can compete for a conference title,” said Diamond.

OCU was 15-20 last season and advanced to the NCCAA regional tournament.

Diamond expressed his appreciation to coach Goodwin for all his help to make him a better player and thanked those family members who supported him throughout his career including his parents Julie and Darren Diamond and grandparents Myra and Fred Diamond.

“No matter if I had a good day or bad on the field or if it was something that didn’t even involve baseball, they were always there to support me,” said Diamond.