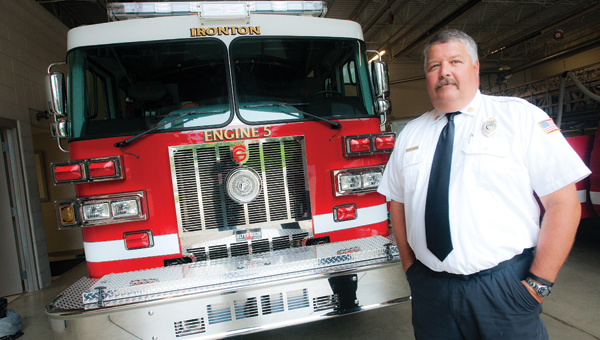 On Monday Mike “Moose” Mahlmeister was sworn in as chief of the Ironton Fire Department.

Mike Mahlmeister, or “Moose” to those close to him, took over as the new fire chief of the Ironton Fire Department after being sworn in by Ironton Mayor Rich Blankenship Monday morning at the fire station. That’s something he says has been a goal of his for a while.

“It’s always been a dream of mine to be fire chief,” he said. “You start out in the fire service, you don’t want to seem too ambitious, but it’s always something I’ve kept in the back of my mind.”

Mahlmeister said he’s been with the Ironton Fire Department for around 23 years and previously served as the department’s inspector.

“When I first started, I kind of gravitated toward the inspector position, but as I gravitated that way, it also pulled me in towards the chief’s office,” he said. “I tried to learn as much as I could from all the higher-ups, especially the chiefs I’ve had, and I know I’ve got big shoes to fill from Chief Runyon. But I think I’ve learned a lot and I think I’m ready to go.”

Mahlmeister has lived in Ironton his whole life, graduating from Ironton High School and receiving his bachelor’s degree in education from Marshall University.

Being a teacher in the way he leads the department is something Mahlmeister stressed was very important to him.

“To me the most important thing is, as in, I think, any job, is teaching; not being a dictator, but teaching people how to do things, what to do and I’m going to try to work my employees that way,” he said. “To me it’s more of a teaching situation than a boss situation.”

As much as Mahlmeister said he will take pride in teaching others as the new chief, he also said he has learned a lot over the years at the department.

“I’ve worked with really good guys,” he said. “The 29 other guys here now, including the ones we just swore in, I’ve learned from every one of them. You remember the good times, the bad times, funny times and scary times. All of these make an impression on you and I want to use all the experiences I’ve had to lead the guys and keep them safe and the citizens safe.”

“I know Mike will do a fantastic job for the city as the new chief,” Blankenship said. “He’s been with the department many years and knows the ins and outs. I believe he’ll jump right in and take off and serve our city well. We wish him the best of luck.”

Mahlmeister has been married to his wife Monica for 18 years and has two children.