Rally on the River officially underway 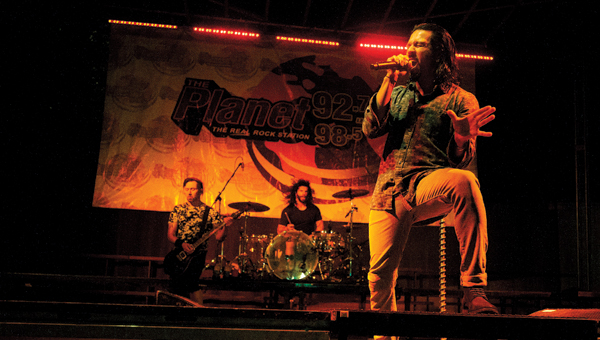 Pop Evil performs during the 2015 Rally on the River in downtown Ironton.

Following a pre-party Wednesday night at the Ro-Na, the Friends of Ironton-hosted Rally on the River made its official start for the year on Thursday.

“We have a good turnout,” Jane Griffith, with the Friends of Ironton, said. “Thursday is usually a slow day for us, but we’ve sold over 100 tickets in four hours at just one entrance, which is unbelievable.”

Rock music blared throughout the rally grounds as various bands took the main stage throughout the day, evening and night, motorcycles were plenty, beer was flowing and vendors sold food and merchandise.

Not only do bikers from the area come to the event each year, but it also draws bikers and visitors from all across the county.

Scott Albee and Rick Bender made the 860-mile trip from central Wisconsin to be at the rally.

“I like seeing friends down here that I don’t get to see other times,” Albee said. “It took about 12 and a half hours to get here.”

Albee said he has made the trip down to Ironton for the rally each of the past six years, while Bender said he has attended all but the first year of the event.

The Rally continues through Sunday and opens at 11 a.m. each day.

Also related to the Rally, Cally Wurts is selling Rally on the River poker run tickets, which is set for Saturday at noon, with an option to buy an extra ticket for $5. Proceeds of purchased extra tickets go to her mother, Susan Ross’ procedure for multiple sclerosis.

Wurts said her mother has the opportunity to have an amniotic stem cell transplant done that can reverse the effect or stop the progression of the disease, a procedure she said the doctor gave to someone in the same condition who is now walking and running.

Wurts is set up at the farmers market entrance of the rally opposite the entrance closest to the spray park. There is also a GoFundMe account set up for donations in which people can donate at www.gofundme.com/standforsusan.

A Florida man who allegedly threatened Ironton Elementary School this past fall turned down his final plea offer and will... read more