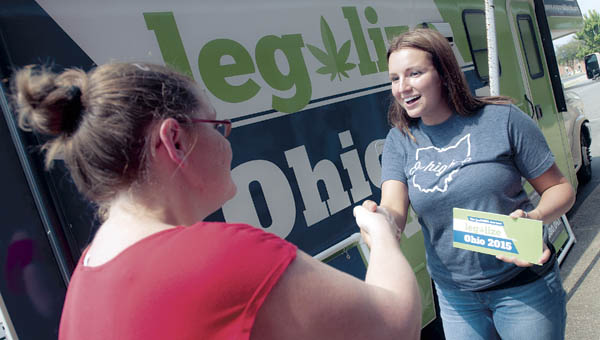 Haley Phillippi talks with resident Janette Gollihugh on Issue 3, the legalization of marijuana, during a visit to Ironton Thursday.

For Ironton resident Janette Gollihugh, legalizing marijuana in the state of Ohio is what she is hoping for come November.

“My son who’s 8 has epilepsy and his meds don’t always work,” she said. “I’m looking for things that will help and medicinal marijuana would help him with his epilepsy.”

On Thursday afternoon the Responsible Ohio Green Rush Bus Tour set up near the Lawrence County courthouse, part of the group’s effort to educate voters on Issue 3 which would legalize marijuana in Ohio for medicinal and recreational use for those 21 and over.

“We’re traveling to all 88 counties in the state and over 20 college campuses,” Haley Phillippi, Green Rush Bus Tour spokesperson, said. “We want to inform voters about Issue 3 in Ohio.”

If passed, Issue 3 would place 10 grow sites across the state along with an unlimited amount of medicinal dispensaries and 1,150 retail shops across the whole state.

“We’ve done our research and have looked at the other states that have legalized marijuana,” Phillippi said. “We thought it would be best to limit it to 10 grow sites that will compete with one another. That’s the best and safest way for Ohio.”

Besides the 10 growing sites, those 21 and over would also be able to grow four flowering plants in their homes for personal use.

Phillippi added that passing Issue 3 would take the streets back from drug dealers as well as pump tax revenue back into all 88 counties and create thousands of jobs.

Responsible Ohio claims legalization in Ohio would also direct 85 percent of the tax revenue from the marijuana industry to county, municipal and township governments for police, firefighters and roads.

The supporters also say $2,580,041 in tax revenue would be pumped back into Lawrence County.

“The time has come for reform in Ohio. We’ve had years and years of failed marijuana provision in Ohio,” Phillippi said. “Hundreds of millions of dollars are spent each year and law enforcement agrees with us that that money can be spent elsewhere on hard criminals.”

The deadline to register to vote is Oct. 5 and voting will take place Nov. 3. For more information, visit www.responsibleohio.com.