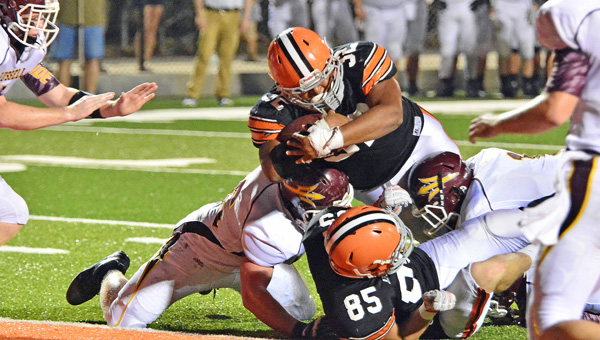 The year was 1998. The Beechwood Tigers and their tradition-rich program came to visit Tanks Memorial Stadium and play another traditional football power in the Ironton Fighting Tigers.

With the two teams meeting again this Friday at Tanks Stadium, it seemed only appropriate to take a step back in time to that first and memorable meeting.

But high winds caused a shortage in the transformers and caused light towers on the visitors’ side of the field to go off and that delayed the start of the game.

Once the game began, the teams played until the 9:20 mark of the second quarter when the lights short-circuited again due to the wind causing the wires to touch and short out the lights.

Beechwood head coach Mike Yeagle decided not to wait for the lighting to be restored and took his team home despite an offer by Ironton athletic director and assistant coach Mike Burcham.

“We just wanted to play a good team. I told them they could take as much time as they needed to stretch and warm up. Their coach said they had a long trip and they weren’t prepared to spend the night,” said Burcham.

“I told him it won’t take much longer because (the AEP workers) are here. The first time we had to wait for them to come. After they fixed it they just stayed. It was too bad. We had a pretty good game going on.”

Burcham offered to put the team up in a hotel for the night, feed them on Friday night, breakfast on Saturday and after the completion of the game on Saturday. He suggested a noon starting time.

But the Yeagle passed on the proposal and loaded up the team bus and went home.

Former Cincinnati Bengals’ guard Max Montoya was an assistant coach for Beechwood and had a son on the team.

Montoya was talking with former teammate and Ironton native Coy Bacon during the delay and heard the proposal.

When the coach turned down the offer, Montoya was upset that they wouldn’t accept the offer and finish the game.

Beechwood was leading 21-20 at the time of the second delay.

James Taylor — who played at Ohio University and later got tryouts with the Green Bay Packers and New York Jets — had all three touchdowns for Ironton.

Taylor caught touchdown passes of 52 and 15 yards from quarterback Jimmy Payton and returned a kickoff 91 yards for a score.

Beechwood’s Jordan Jobe had all three of his team’s scores on receptions of 92, 32 and 82 yards. Two of the passes were from Jason Haines and the third from Derek Estep.

Beechwood missed its first extra point attempt but Haines threw to Estep for a two-point conversion after the second score.

(Suspended with 9:20 left in first half)