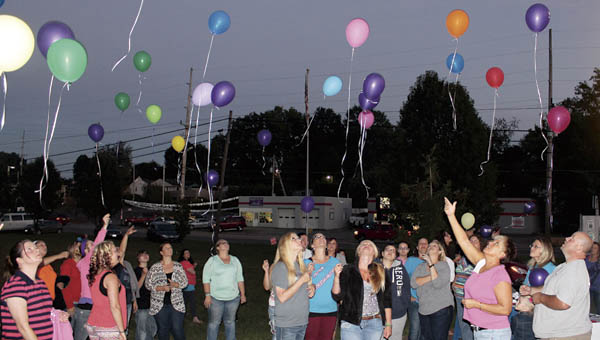 Balloons are released to remember those who have lost battles with drug addictions.

CHESAPEAKE –– Drug addiction is an epidemic that not only affects local communities but the entire country.

Several people attended a candlelight vigil hosted by Spectrum Outreach Services Wednesday evening at the Chesapeake Park, as part of the group’s efforts to bring awareness to the problem in Lawrence County.“Lawrence County doesn’t get a lot of attention being stuck between Cabell County and Scioto County,” Kathy Ross, with Spectrum Outreach Services, said. “We decided to bring a banner all across Lawrence County throughout September for National Recovery Month for people to sign or bring pictures of loved ones lost to addiction to add to it.”

Ross is a recovering addict herself who has been clean for five years and now spends her time reaching out to those struggling with addictions.

“She’s a big advocate for the addicted,” Donna Reynolds, Ross’ sister, said. “She truly believes that if she sees anything anywhere and can help, she will.”

Those in attendance decorated bags and held candles for people struggling in hopes that they will reach out and get help.

“I’m here because I’m in treatment and I know what it means to be addicted. I’m 30 years old and have been active since I was 9,” Tiffany Grooms, of Lucasville, said. “I have friends and family that are struggling that I’m hoping will get treatment.”

Grooms said since being in treatment, she has been sober for almost eight months.

“I lost by best friend to addiction, and it didn’t hit me until now,” Robin Stanley, of Wheelersburg, said. “My best friend died of an overdose. I never thought it could be me, but it could have been me just as easily as it was him.”

Stanley said she is also currently in treatment for her drug addiction.

“I had a friend die of bath salt,” she said. “There is not a whole lot known about that, but she was only 35 years old and left three girls.”

Spectrum Outreach Services has been established for nine and a half years and is an outpatient center that also has two inpatient centers offering long-term support for addiction. The program houses women who are recovering from drug addiction and trying to get their lives back on track. Owner Bob Vinson said Spectrum Outreach Services is working on getting housing for recovering males.

“We do our best to try and help each and every person that we come in contact with,” Vinson said. “We work with all law enforcement, but we’re not looking for people to get locked up. We’re looking for the chance to take people in and work with them.”

Vinson is in recovery himself and has been sober for more than 24 years.

“We think we’ve had pretty good success and we hope to continue that,” Vinson said.

The next candlelight vigil will be Wednesday at Paul Porter Park in Coal Grove, followed by the last one on Wednesday, Sept. 30, at the South Point Park.

“These events bring awareness to the community,” Sgt. Lucas Morris, of the Chesapeake Police Department, said. “We’re already aware of the problem, but maybe this will influence people to seek help and talk to their friends and family.”

Columbus — The fiscal officer for the Lawrence County Department Job and Family Services (LCDJFS) was overpaid $11,659 for undocumented... read more