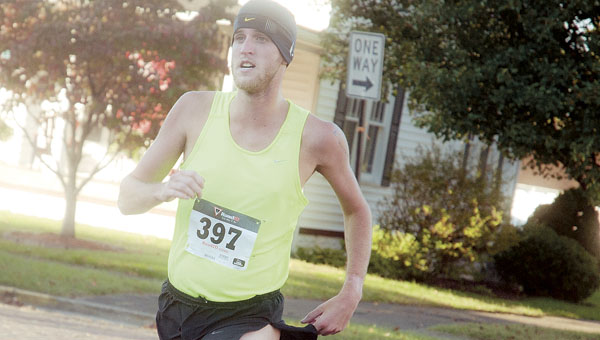 Dustin Moritz is the first to cross the finish line.

Although Ironton resident Dustin Moritz never got to meet his uncle, running in his memory is something Moritz said was important to him.

“I ran for my uncle Mike,” Moritz said. “I never met him, but anytime I can run and represent someone in my family, I’m all for it.”

Moritz was the first overall winner of the sixth annual Community Hospice Run in Remembrance 5K Race Saturday morning behind Ohio University Southern with a time of 16:43.

The race brought out 88 participants running in remembrance of someone lost to cancer.

“We have the race in Ironton every year and it’s always a big success,” Mandy Medinger, director of human resources for Community Hospice of the Huntington, West Virginia, area, said. “We have groups and individuals that participate.”

Boards were set up in the Mains Rotunda of Ohio University Southern, where there was registration for the race as well as the award ceremony at the conclusion, with the names of the people each participant was running for.

Prizes were also given to top male and female finishers and top finishers in each age group.

Each year, the National Football League has its Super Bowl in the early part of February. The same can be... read more