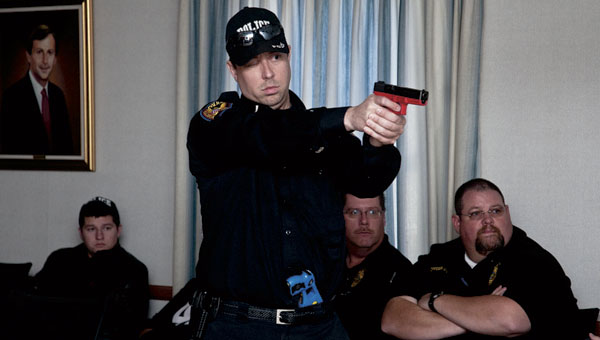 Local law enforcement officers spent the past two days going through a series of training sessions at Ohio University Southern covering search and seizure on Monday and using judgment for use of force on Tuesday.

“This training is offered by the Lawrence County Prosecutor’s Office Drug Task Force. The funds come from the drug task force’s budget,” David Marcum, chief investigator at the prosecutor’s office, said. “It’s free to all officers. We want the officers to be well trained when it becomes necessary for what force to use and when to use it.”

Instructors James Bennett and Jim Green, from the Ohio Peace Officers Training Academy (OPOTA) taught the sessions, with Bennett going over the search and seizure portion and Green the judgement for use of force.

Judgment on use of force was taught Tuesday using the Milo System, showing officers various situations on a projector, such as domestic violence incidents and school shootings. Officers were asked to use force they thought was justified, whether it be use of a glock or taser, before going over what they did with Green and learning from the situations.

“It’s great training. This is the second one I’ve been to,” Chesapeake Police Chief Dennis Gibson said. “It’s good for every department and any law enforcement. You know what your mistakes are and learn from them before getting into those situations in real life.”