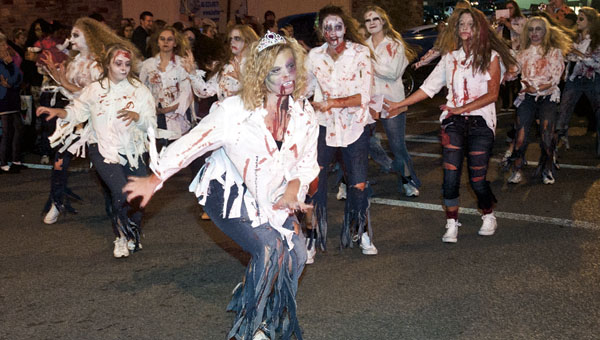 Members of the Ironton High School color guard perform during the parade.

Hundreds of children and their families took part lining up for candy at the Ironton city center and several downtown businesses.

Originally started by the Ironton Business Association, Ironton safe trick-or-treat has been going on for approximately 15 years.

“Its purpose was to give a nice place for kids to come in and wear their costumes and not have to worry about anything,” Richard Patrick, of Patrick Insurance and the Ironton Business Association, said. “It also gives the businesses in town a chance to give back. We’re happy to be able to give the kids a safe place to go.”

Lawrence County Sheriff Jeff Lawless said he is happy to be a part of the event each year.

“It’s a great thing every year,” Lawless said. “It’s a good, safe way to come out and let the kids participate in the traditions of Halloween and know that the kids are safe and the candy is safe.”

“The Ironton Fire Department and Ironton High School band help with the parade,” Lou Pyles, with the Ironton Lions Club, said. It’s festive for the children in the community and it’s fun for them. It’s all about the kids.”

The parade took off from the fountain and continued down Third Street, ending at the Ro-Na Theatre parking lot, where the Ironton Rotary Club was set up to judge the costume contest.

Winning first place awards were Hailey Nance for best witch costume, Kennedi Greene, dressed as Pebbles from the Flintstones, for best character costume, Liam McGlome, dressed as Superman, for most patriotic costume, Aubrey Lockwood, dressed as a Mexican Day of the Dead doll, for scariest costume and Landon Rowe, dressed as a mouse in a mouse trap, for most original costume.

Blood and Brews Fest set for this Saturday

30 microbrewers and distributors to attend The Friends of Ironton will host its first Blood and Brews craft beer fest... read more