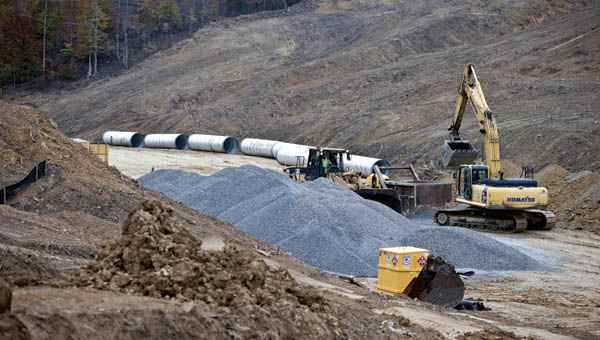 Ongoing construction at the site of the future State Route 823, also known at the Portsmouth Bypass.

MINFORD — Construction on the Southern Ohio Veterans Memorial Highway is well underway after first breaking ground back in June and is expected to have its substantial completion by December of 2018 and final completion by April 2019.

The memorial highway, also known as State Route 823 or the Portsmouth Bypass, will be a limited access 16-mile, four-lane highway running from north of Lucasville to Wheelersburg, bypassing 26 miles of U.S. 23 and U.S. 52, avoiding 30 traffic signals, 80 intersections and 500 driveways while containing 21 bridges and five interchanges.

Developer of the project, Portsmouth Gateway Group, LLC, holds the contract with the Ohio Department of Transportation (ODOT) in a Private Public Partnership (P3) to design, build, operate and maintain the highway. The Portsmouth Gateway Group, an infrastructure development firm comprised of its equity members ACS Infrastructure Development, Inc., InfraRed Capital Partners Limited and Star America Fund General Partners, LLC, will maintain ownership of the bridge and operate and maintain it for 35 years after completion, at which point ODOT will take over.

Originally set as a standard ODOT project with three phases, working with the Portsmouth Gateway Group in a P3 allows the project to be worked on all at once instead of in three phases. This not only speeds up the delivery of the project by 17 years, but also allows ODOT to pay for the project over a longer period of time. The project also marks the largest single project ODOT has ever been apart of in its history.

The highway is the last stage in completing the Appalachian Highway System in Ohio, which connects the Appalachia highways to the Interstate system, improves regional and national market access to Appalachia while at the same time generating economic development.

Tom Barnitz, ODOT project manager and Maddex both said the project will not only benefit the area when its complete, but positives have already been evident during the construction process.

“This project is clearly an economic driver,” Maddex said. “We use as many local resources as we can.”

Barnitz added that the construction has already boosted the local economy.

“The county’s witnessed a spike in sales tax revenue which is evidence of money in the local economy as a result of construction,” Barnitz said. “It’s also a big opportunity for economic development in the future.”

Construction involves excavating more than 20 million cubic yards of earth, which is about 95 percent rock, with controlled blasting and 402,182 tons of asphalt will be used.

“This will help folks passing through and folks in the area getting to other locations,” Barnitz said. “It will connect this area with other major highways in Ohio.”

For more information or updates on the project, visit www.pgg823.com.