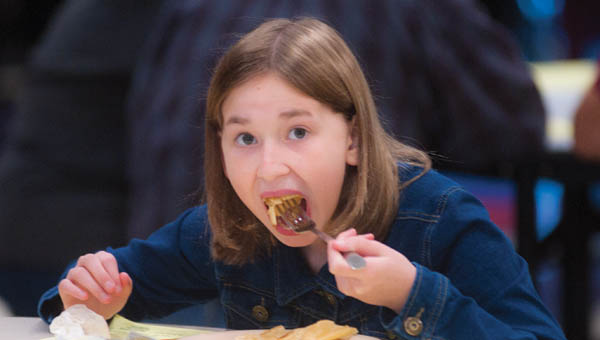 Twelve-year-old Emma Randan, of Proctorville, takes a mouthful of pancakes while at the annual Chesapeake-Proctorville Lions Club pancake breakfast on Saturday.

CHESAPEAKE — Pancakes were flying off the griddle at Chesapeake Elementary School this past Saturday, as the Chesapeake-Proctorville-Rome Lions Club hosted its annual pancake breakfast for the 15th year.

“We help local citizens with eyeglasses, eye appointments and, a few years ago, we donated a Seeing Eye dog,” Scott Hart, president of the Lions Club, said.

For approximately four years, along with the Lions Club, Tidy Up Lawrence County has been a part of the pancake breakfast as well.

Hart said usually half of the proceeds go to TLC for its efforts in cleaning up Lawrence County’s eastern end.

“We just completed our fourth year of litter awareness and beautification of Proctorville and Chesapeake, TLC president Billie Smith said. “We’ve been in operation since 2005 and have performed 33 cleanups.”

Smith said TLC uses the money it receives from the pancake breakfast for T-shirts for volunteers, litter sticks and flowers for flower pots in the eastern end villages.

The Chesapeake-Proctorville-Rome Lions Club has 500 members of various positions in the community.

“We have council members, mayors and a county auditor in our club,” Hart said. “It’s good to see them get out here to work in the community.”