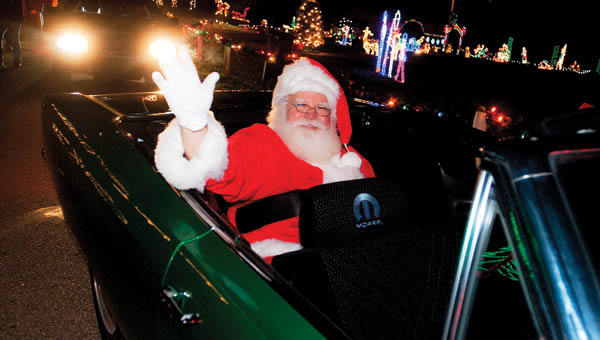 COAL GROVE — From the Christmas light display illuminating Paul Porter Park to the sound of Christmas carols played by the Dawson-Bryant Hornet Band of Pride, the spirit of Christmas was in the crisp December air Friday evening at the Coal Grove Christmas parade.

Sponsored by the Coal Grove Betterment Club, club vice president Tammy Nutter said the parade is the pride of the community. Residents lined the street leading up to the park where the parade concluded in one of the pavilions with donuts, cookies and hot chocolate.

“The parade keeps getting bigger and bigger, and I love it,” Vickie McDaniel, Coal Grove Betterment Club president, said.

Leading the parade off was the Coal Grove Police Department along with the department’s police dog, Jango, and local fire departments. The parade continued with the high school band playing traditional Christmas carols, followed by Wendy’s, Spice of Life, Cyndi’s Studio and Coal Grove Church of the Nazarene. Then, pulling up in style was Santa Claus in a green Plymouth convertible to end the parade before setting up in the pavilion for pictures.

Vickie McDaniel said the parade has been a tradition for many years. Except last year when it was cancelled due to weather, the tradition has gone on for 12 years straight, she said.

Mayor McDaniel added that he wanted to thank the Coal Grove Betterment Club for sponsoring the event as well as decorating Paul Porter Park with a Christmas light display each year.

Gilpin reflects on tenure as mayor

Longtime Mayor Dick Gilpin, sits inside his business, Gilpin’s Creative Trophies, as he reminisces over his terms as village mayor.... read more