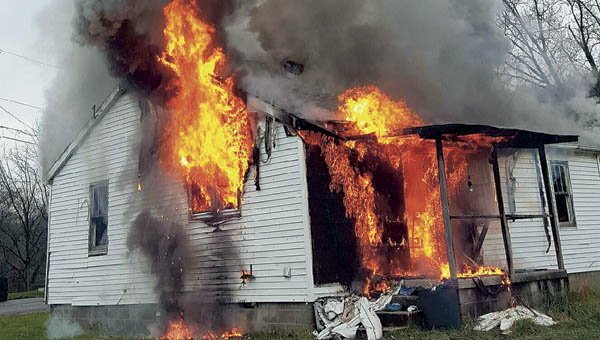 Fire thought to have started in kitchen

COAL GROVE–– A house at 207 Ridgeway St. went up in flames at approximately 1:30 p.m. on Monday afternoon

“No one lived in the house yet at the time of the fire, but people were in the process of moving in,” Chad Kelly, assistant chief of the Coal Grove Volunteer Fire Department, said. “The electric was turned on either yesterday evening or this morning (Monday), but we don’t know for sure the official cause of the fire. It’s still under investigation.”

Kelly added that it appeared the fire started in the general area of the kitchen.

John Adams, a neighbor behind the house, said he was going to his fiancée’s house next door to walk her dog when he saw the fire.

“I saw the flames going around the back door and it was spreading quick,” he said. “I called 911.”

Responding to the fire were the Coal Grove Police Department and the volunteer fire departments of Coal Grove, Upper Township, Perry Township and South Point.

SOUTH POINT — The South Point Police Department says a $5,000 reward has been offered for information that leads to... read more