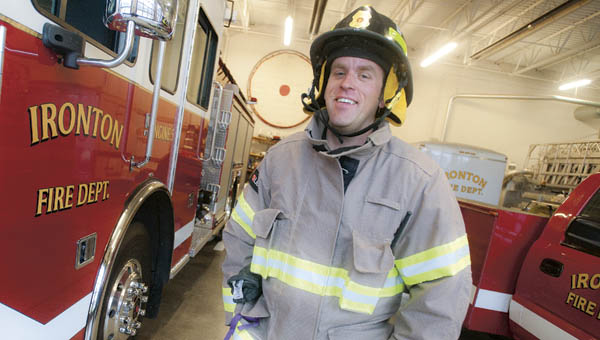 Joe Laber, with the Ironton Fire Department, graduated with honors at the Ohio Fire Academy.

Leadership is a very important quality to any firefighter. It’s also part of what made Ironton firefighter Joe Laber the honor graduate in his class of just under 30 firefighters from all over the state at the Ohio Fire Academy in Reynoldsburg in November.

“Everyone at the institution had complimentary things to say about Joe and his leadership and work ethic,” Ironton Fire Chief Mike Mahlmeister said. “I didn’t know any of them, but it’s nice to hear something nice coming back about one of your recruits.”

Laber demonstrated everything that is required and then some during the eight-week long course at the academy to claim the honor, which is decided by a combination of test scores, both physical and on paper, as well as votes by the instructors and peers.

“I expected to do pretty good, but not that good. They told me that I was in the running about halfway through, but I didn’t really think I would get it,” Laber said. “I was just doing my best.”

“In the 23 years that I’ve been here, he’s the only one that’s been named honor graduate of their class from our department,” Mahlmeister said.

“I’m very excited for him. What an addition to our fire force,” she said. “I’m proud that he represented the state so well and we look for great things to come from him. He’s an excellent employee.”