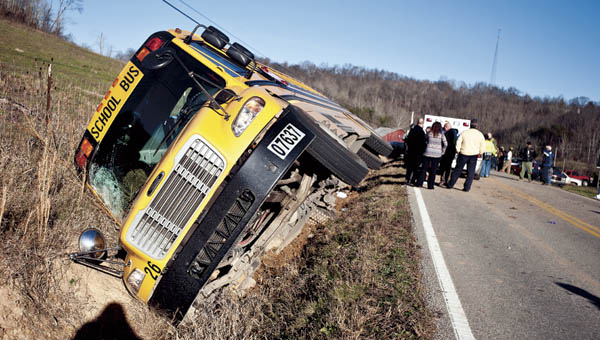 A South Point school bus was on its side along a ditch on State Route 243, around the 10-mile marker Tuesday afternoon. Ten were sent to the hospital.

Authorities unsure how it happened

GETAWAY–– Another vehicle may have been involved in the Tuesday school bus accident that sent 10 to the hospital as the investigation continues.

That is according to a release by the Ohio State Highway Patrol.

“No complete description (of the vehicle) is available at this time,” the release stated.

At about 2:15 p.m. a South Point High School bus went off the side of the road and came to rest in a ditch off State Route 243.

“The school bus turned on its side into the ditch,” Lt. Barry Call, of the patrol, said. “We’re not 100 percent sure right now how it happened.”

Call said that approximately 30 total students were on the bus and that all were female but the driver. The bus was traveling westbound from Collins Career Center when it crashed. Nine students and the driver were taken to Cabell Huntington Hospital.

“There were no life-threatening injuries, mostly just bumps and bruises,” Call said. “But some were worse than others.”

An officer from the patrol went to the hospital following the accident to obtain all of the information on those transported and a statement from the bus driver.