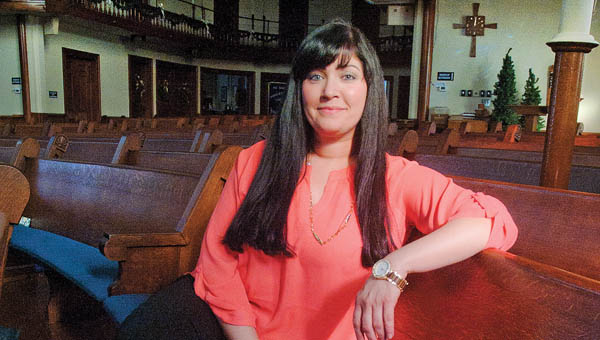 April Miller has joined the staff at First United Methodist Church, located at 101 N. Fifth St., as the director of family ministries.

An opportunity to sing at an October concert Harvest for the Hungry food pantry put on at Ironton First Methodist Church led to something much bigger for Ironton resident April Fletcher.

About three weeks ago, Fletcher was named the church’s director of family ministries, something she described as a dream come true.

“I’ve always been involved in music and I love to sing. A friend of mine invited me to sing at a concert here and the church contacted me after that,” she said. “I was really excited about it. It’s like a dream job.”

As director of family ministries, Fletcher will be in charge of teaching Sunday school, children’s church and teen youth group.

Before accepting the position, she was attending Ohio University Southern to become a teacher, which she still plans to pursue, as well as working part-time as a teacher’s aide at Ironton Elementary School.

“I wanted to be a teacher because I love children. They are the future and in order to get them in the right direction, I want to teach and inspire them,” she said.

Fletcher added that religion has always been a big part of her life, which is another reason she feels blessed to be in this position.

“Working at the church allows me to continue teaching children while at the same time being about God,” she said. “I’m super excited about it.”

Plans Fletcher has moving forward as director include getting more youth involved at the church through teen youth nights, possible field trips and being active in the community through service.

“It makes me feel fulfilled,” she said. “Like I’m fulfilling my purpose.”