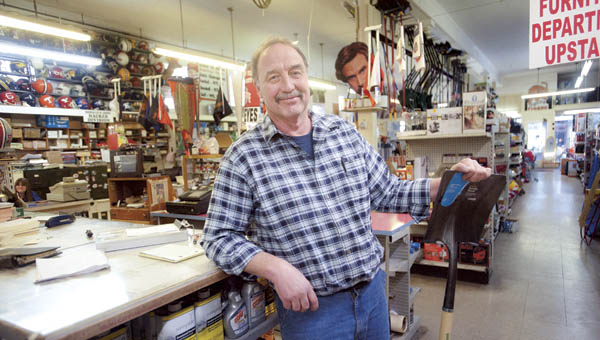 A face for the generations, Jim Hacker is celebrating the 90th anniversary of Iron City Hardware in downtown Ironton.

Three years prior to the Great Depression, Iron City Hardware opened for business in downtown Ironton in 1926. Knowing money wasn’t a commodity at that time, the store was one of the only to give credit to its customers, proving the type of business Iron City Hardware has become known for for so long.

The business has been in the Hacker family for nine decades this year. Third generation owner Jim Hacker said it’s been a part of his life since he can remember.

“My grandpa, Herman Hacker, and uncle, Henry Hacker, started the business. My dad, Don Hacker, and his brother, John Hacker, took it over in the mid 50s,” Jim Hacker said. “I remember coming here from St. Lawrence, hanging out and helping after school. I’ve been here pretty much my whole life.”

Jim Hacker took the business over from his dad in the early 90s.

“It’s great,” he said, talking about running the family business. “I got to work with my best friend, my dad, for over 35 years. I feel lucky because I enjoy it. This is all I’ve ever done.”

Hacker takes great pride in knowing the business provides customers with products and service in a friendly environment, referring to the store as having a “Cheers”-like feel.

“We try to have a friendly store and we know most of the customers,” he said. “We still have third-generation customers come in from the Great Depression and talk about how my grandpa gave them credit years ago,” adding that most of the customers receiving credit at that time came back to pay when they got back on their feet.

Since opening, Iron City Hardware hasn’t changed much, but expanded about 20 years ago now to include furniture and lumber departments. Mini “Iron City Storage” units can also be rented by the month from the store.

“There used to be four hardware stores in town, but now it’s down to two,” Hacker said. “It’s tougher with big store competition, but we’re hanging in there.”

Hacker said members of the family have worked or helped out at the business over the years, including his wife, daughter and brother, Dan Hacker, who retired in 2010.

Promotions will be given throughout this year in honor of the 90-year mark.