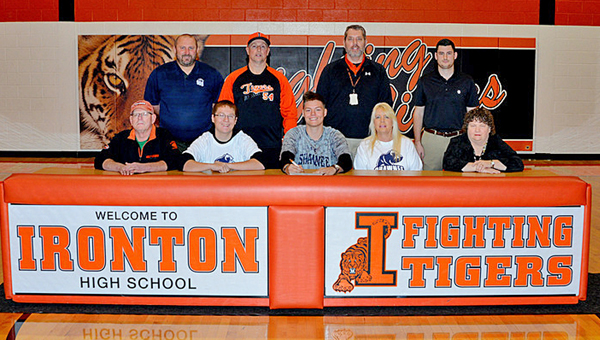 Shawnee State Bears’ head baseball coach Chris Moore knows a good thing when he sees one, and he saw something special in Cody Rawlins.

The Ironton Fighting Tigers’ senior pitcher came to a Shawnee State camp last summer and his performance immediately caught the eye of the coaching staff.

“It’s rare that we make a move to try to get a commitment from a player right out of camp without seeing him play in a game, but the thing that we saw that we loved was his athletic profile and how he projects,” said Moore.

“I love his academic profile. He fits with what we’re trying to do. Frankly, he projects himself as a mature young man who thought a lot about what he wanted to do. He has a plan moving forward. You add all those things up and he’s an impressive young man.”

Like all freshmen, Moore said Rawlins will probably have to wait his turn initially but he is excited about what Rawlins could do for the program.

“With his athletic frame and the way his arm works and his ability to throw a change-up, and the projection of increase velocity, he projects to be a starter,” said Moore.

The 6-foot-4 Rawlins looked at several other schools including the University of Pikeville, Ohio Christian University and Grove City College before settling on Shawnee State.

“They stood out as the best program academically and they had my major,” said Rawlins who plans to major in computer engineering. “I feel like I can advance more as a player there than anywhere else.”

Ironton coach Larry Goodwin saw some talent in Rawlins as early as his freshman year.

“He pitched jayvee his freshman and sophomore years and I saw a lot of potential. I told Cody you have the potential to get in the low 80s with his arm action, his height and his work ethic. I told him and he ran with it and worked his tail off,” said Goodwin.

Rawlins went to several showcases and was clocked as high as 83 miles an hour. Goodwin said there is even more potential in the right-hander.

“He has a good breaking pitch, a good change-up, he moves the ball in an out. He’s a pitcher. I think he has the potential to throw in the high 80s. I hate to put a ceiling on anyone,” said Goodwin.

“When he gets up to Shawnee State and gets in the swimming pool and starts lifting weights and doing all the stuff they do, and coach Moore is a good pitching coach, and gets around some of their pitchers with is work ethic, the sky’s the limit for him.”

Rawlings pitched in three games as a sophomore and recorded a save. He struck out seven and walked three in 5.1 innings.

“From last year to this year, I feel like I’ve advanced a lot. I wasn’t too bad last year, but this year I’ll be able to dominate on the mound. I’ve been doing weighted ball work and that’s helped a lot, but I feel once get on Shawnee’s program I’ll definitely be able to increase my velocity, so I’m pretty excited about that,” said Rawlins.

Rawlins ran cross country and he said the sport was instrumental in his improvement.

“That’s one of the biggest things that helped me. From my sophomore year to my junior year it definitely made an impact and kept me in a whole lot better shape.

Rawlins said he practices and throws almost every day.

“I can’t remember having a day off. I just keep on throwing,” he said.

Cody is the son of Lena Rawlins and the late Eddie Rawlins who died two years ago but had a great impact on his life.

“He was one of my motivations. He had helped me out and I knew I had to step up in my family and help out,” said Rawlins.