Boss for the day 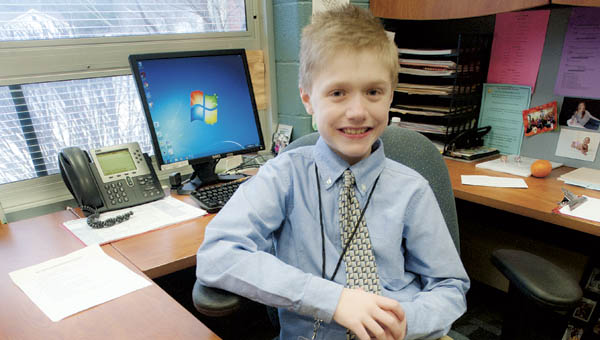 Fourth grader Owen Johnson makes himself right at home in the principal’s office at Dawson-Bryant Elementary School. Owen is one of four at the school who got to play grown-up for the day following an auction for the positions during the school’s fall festival.

The students at Dawson-Bryant Elementary School on Wednesday received five extra minutes of recess, made special projects in art class, heard different voices leading gym class and the teachers even got to leave five minutes early.

That’s because four students had the opportunity to be principal, art teacher and gym teacher for the day.

Fourth grader Owen Johnson served as the school’s principal Wednesday, where not only did he extend recess, he got to do a number of other things while being in charge.

“It feels awesome getting to work with our regular principal, Angie LaFon,” Owens said. “This morning I got to say the announcements and read a book to a kindergarten class.”

Owens said that he wants to be a principal when he’s older, so this experience really helped him.

Second grader Madison Jenkins was the art teacher, while brothers Matthew and Owen Aldridge were the gym teachers.

“We made door hangers and colored zebras,” Jenkins said. “And I got to call attendance.”

The Aldridge brothers received whistles and T-shirts to wear from the regular gym teacher Wednesday morning before beginning the day’s classes.

“I like teaching the kids,” second grader Matthew Aldridge, said. “I was also the referee of a basketball game.”

Owen Aldridge, a kindergarten student, said he also likes teaching and he focused on the discipline of the class.

The four students received the opportunity after winning bids for the items at the school’s fall festival auction, which raises money for the school’s Parent Teacher Organization (PTO).

“This was the second year that we added this to our fall festival auction items,” principal LaFon said. “I’m very proud of the kids. They’ve taken the jobs very seriously and were all prepared ahead of time with lesson plans. They really took ownership of the project and they’ve done it well.”