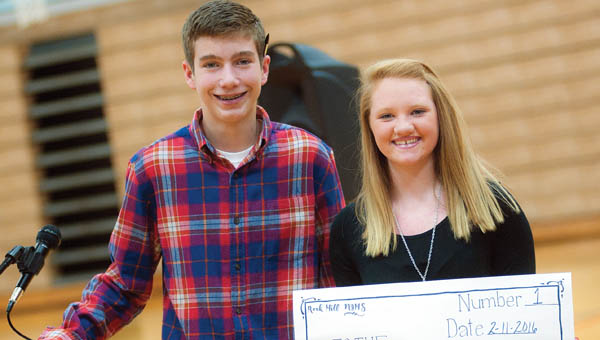 PEDRO — The Rock Hill Middle School National Junior Honor Society (NJHS) presented a $1,000 check to the Juvenile Diabetes Research Foundation (JDRF) at an assembly Thursday afternoon after raising money as part of its large service project of the year.

“The kids come up with their large service project each year,” Denise Fraley, Rock Hill NJHS adviser, said. “The students choose what they want to donate to.”

One of the biggest reasons the JDRF was chosen this year is because eighth grader and NJHS member Raiden Jenkins has Type I Diabetes.

NJHS President Brady Floyd gave an introduction to open the assembly prior to a diabetes awareness video being shown, and Jenkins sharing her story about dealing with diabetes. Rock Hill superintendent Wes Hairston, who also has diabetes, followed up with his own story and said he was honored to be able to speak.

The assembly concluded with Floyd and Jenkins presenting the check.

“It made me feel really good to be able to donate for diabetes,” Jenkins said.

Those interested in exploring the world of creating watercolor paintings can get some tips and guidance from an upcoming free... read more