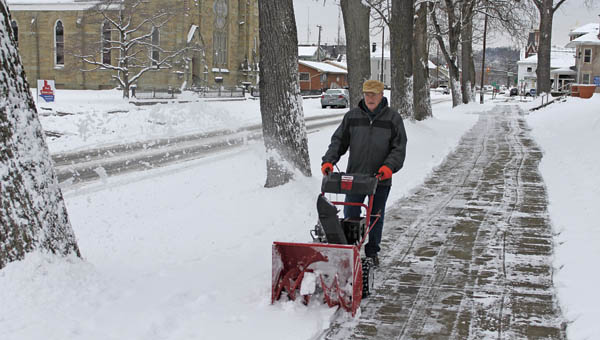 St. Lawrence School janitor Jim Monte snow blows the sidewalk in front of the school along Sixth Street in Ironton on Monday morning.

Low-lying areas the most susceptible

Flash floods are possible throughout Lawrence County following Sunday night’s snowstorm, and rain and snow Monday throughout the night.

“Widespread precipitation during the overnight could bring as much as 1.5 inches of rain,” an Ohio Department of Transportation (ODOT) press release stated Monday night. “This, coupled with melting snow, could result in flash flooding and ponding water on roadways.”

“The snow melting is a huge factor,” Fuller said. “And with the rain melting the snow, there’s a lot of additional standing water.”

Fuller added that there isn’t a lot ODOT crews can do for flash flooding, but will close roads if necessary.

Other than flash flooding, Fuller said ODOT crews were out plowing and treating roads with salt Monday after snowing Sunday night. Although most of the main roads are clear, it is urged to use caution driving after precipitation Monday night and when traveling on the side streets.

“The biggest thing is slowing down and allowing extra travel time,” Fuller said. “Making sure you have a full tank of gas, making sure your windshield wipers are working, putting down distractions like a cell phone; it’s little things like that. But planning ahead by allowing extra time and simply reducing speed is a huge factor for people.”

Will the state make it legal?