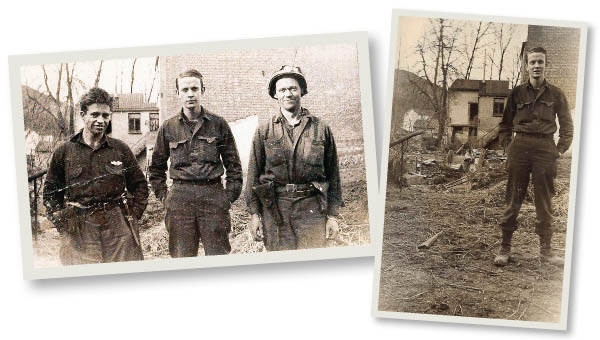 Connie Dziagwa lives in Parkersburg, West Virginia, now, but has deep family roots in Ironton. Her great-grandfather, Charles Mayne, grandfather, Charles Elmer Mayne and father, Don Mayne, all from Ironton, served in the military and wrote letters home during that time. She recently put together those letters in a book titled “Letters Home to Ironton.”

“This is a collection of letters home from a trio of Ironton, Ohio soldiers who are the patriarchs of our family. They represent three generations of Maynes, who served our country during three historic military conflicts spanning a half-century, from 1898 to 1945,” Dziagwa states in the beginning of the book. “They chronicled their experiences and wondered about life back home while stationed in various locations; from a 19th century infantry camp in Pennsylvania, to a dugout in World War I, France, to chateau quarters as victory over Germany drew near during World War II.”

Included in the book are transcriptions of fading handwritten letters, a few postcards and telegrams and preserved photos.

“Obviously we’ve had these letters in our family for a long time and I was concerned about preserving them so everyone in the family can see them,” Dziagwa said about why she created the book. “The oldest letter is from 1898 and I didn’t how long it was going to last.”

Dziagwa’s great-grandfather, Charles A. Mayne, served during the Spanish American War in 1898 and volunteered at 26 years old. Her grandfather, Charles Elmer Mayne, was a second lieutenant in World War I from 1917 to 1919 and enlisted when he was 22. Elmer Mayne’s son, and Dziagwa’s father, Don Mayne, joined the Army in 1943 at 19 years old and served during World War II. Don Mayne returned home in 1945.

Following the war, Charles was an assistant postmaster in Ironton and Elmer was the last surviving member of the Ironton Tanks’ cross-town rival Irishtown Rags semi-pro football team and served as the president of the E.J. Merrill Drug Company in Ironton for more than 50 years. Don was a longtime editor and columnist at The Tribune, where in his later years wrote about his military experiences in his column, The Don Patrol.

Elmer and Don also participated in the annual Ironton Memorial Day Parade for many years and both served as the Grand Marshal in 1942 and 1956 respectively.

Mentioned in many of Don Mayne’s letters was one of his good friends James Gallagher, who still resides in Ironton.

“Don’s daughter found the letters from her great-grandfather, grandfather and father and combined them into a book to cover their experiences during the wars, and Don’s experience in World War II. I shared somewhat the same experiences as her father,” Gallagher said. “I was mentioned rather frequently in the book because Don and I were rather close friends.”

Dziagwa stated in the beginning of the book that unfortunately not all of the letters could be preserved and there are some gaps in time and events. General spelling, punctuation and grammar were retained as written and proper names and locations were corrected as necessary. A few words were not legible and some WWII letters have been censored.

Dziagwa said only a limited number of books were made for family members, Gallagher, the Briggs Lawrence County Library-Ironton branch and the Ohio History Connection. Marshall University also received a copy for its Tri-State history special collection and Ohio State University and Ohio University have requested copies for special collections as well.

COLUMBUS — Republican and Democratic leaders of both chambers of the Ohio General Assembly spoke with the media last week... read more