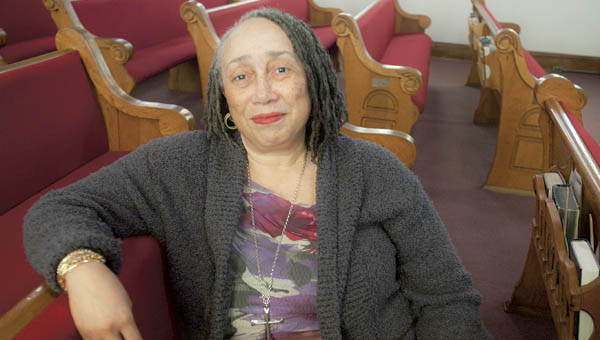 The Rev. Margaret Tyson of the Quinn Chapel Church in Ironton.

The Ironton Quinn Chapel AME Church welcomed a new pastor in November of last year, one who brings plenty of experience in the African Methodist Episcopal Church.

The Rev. Margaret Tyson took over the position at the church and also serves as the pastor of Allen Chapel AME in Portsmouth. She is a member of the AME Third District Board of Christian Education and director of creative arts. Before getting assigned to the AME Dynamic Dayton District of the South Ohio Conference, she pastored and has been in various positions in the Cleveland and Pittsburgh areas, New York, New Jersey, Rhode Island and Connecticut.

“I’m a graduate of the Lutheran Theological Seminary of Philadelphia, where I earned the Master of Sacred Theology degree in Homiletics in 2003 and the Master of Divinity in 2002,” Tyson said. “While at the Lutheran Theological Seminary of Philadelphia, I participated for three years as a member of the Seminarians Interactive program, an interfaith symposium sponsored by the National Conference of Community and Justice.”

She is an Itinerant Elder in the African Methodist Episcopal Church, has served as the associate dean for the NEAC Ministerial Training Institute, has been a member of the Board of Examiners and is a member of the NAACP, who said she’s committed to bringing social justice and affecting the relationships between youth and the justice system. She added that she has been involved in community relations between Blacks and Hispanics in parts of New York and New Jersey.

Besides preaching, Tyson said she is a professional visual artist and poet, who loves to sing and work with children. She has participated in numerous choirs over the years, including the WWRL Choir in New York City. She also developed a curriculum guide for Christian Education in the AME Church.

Although Tyson has only been pastor of the Ironton Quinn Chapel AME Church for a short time, she said she really likes the people and the area.

“I really enjoy the people here,” she said. “There’s a loving spirit and a sense of kindness that I haven’t found in a lot of other places.”

Anderson, Evans to lead group A new president and vice president were chosen for the Lawrence County Bar Association on... read more