Bring on the trophy 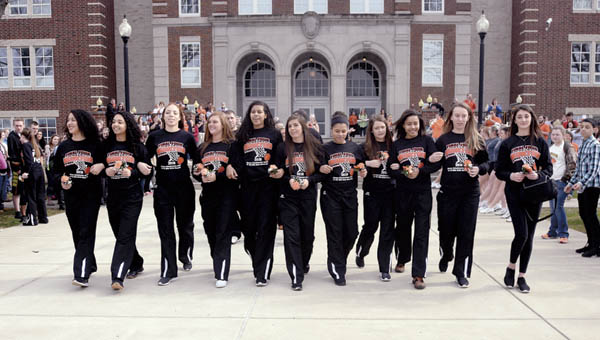 The Ironton Lady Fighting Tigers basketball team is given a send-off Wednesday morning outside of Ironton High School. The Lady Tigers will face off against the Columbus Africentric Lady Nubians today.

The Ironton Lady Fighting Tigers (27-0) had one thing on their minds as they headed for Columbus Wednesday morning — Keeping the train rolling and bringing the state title back to Ironton.

After punching their ticket to the OHSAA Division III Final Four by dropping the West Lafayette Ridgewood Lady Generals in the regional championship game this past Saturday, the team was sent off Wednesday knowing they have the full support of the school and the city.

Students, staff, family and community members lined each side of the walkway in front of the high school to cheer on the team as the Ironton High School marching band, cheerleaders and guard all took part.

“We’re here today not to just send them to the Final Four, we’re going there to clinch the whole thing,” Ironton High School athletic director Mark LaFon said to the crowd. “I want to thank everyone who made this possible.”

“It’s been a process for this group of seniors. They’ve been a very dedicated group for four years,” LaFon said. “This season has been incredible to go undefeated, because going undefeated at any level is tremendous. It’s just been a tremendous effort by them.”

LaFon also had nothing but praise for Coach Graham and the job that he has done since taking over the program 10 years ago. Graham’s record at the helm stands at 162-77 and he was named the AP Coach of the Year this season.

“Coach Graham is a truly dedicated individual when it comes to coaching our girls and putting the program first and foremost,” LaFon said. “He thought from the beginning that they were a state caliber team, and he put in the work to do it.”

Graham thanked everyone at the sendoff for their support throughout the season.

“Thank you for everything,” he said. “From the administration of Ironton City Schools to the faculty and staff here to community members, it’s been amazing. Ironton High School is a very special place athletically and academically.”

When the bus left the high school, it proceeded downtown to the Ironton City Center, where the city employees and people downtown got the chance to send the team off.

“We’re just excited,” Ironton Mayor Katrina Keith, whose daughter plays on the team, said. “Through my eyes, it’s bigger than a basketball game. I’ve watched these girls go undefeated and make history and spread excitement throughout the community. It lets the people know that with hard work and determination, you can do anything.”

Although the team is excited about being in the Final Four, winning the state championship is still the ultimate goal.

“I feel like it’s something I never thought I’d get to experience. Once it’s here, I don’t want that feeling to go away” senior forward Kaylin Easterling said. “I hope we come back with the win and make everyone proud.”

This year marks the Ironton Lady Fighting Tigers’ fourth appearance in the state tournament and the first since 2010. Ironton tips off against the Columbus Africentric Lady Nubians (23-5) today at 3 p.m. in The Ohio State University Schottenstein Center in the state semifinal game. The winner moves on to face the winner of the 1 p.m. game, which features Gates Mills Gilmour Academy (23-5) and Marion Pleasant (26-2), in the state championship game Saturday at 10:45 a.m.

Would have testified against doctor A second man who worked at a former Ironton pain clinic was sentenced Wednesday in... read more