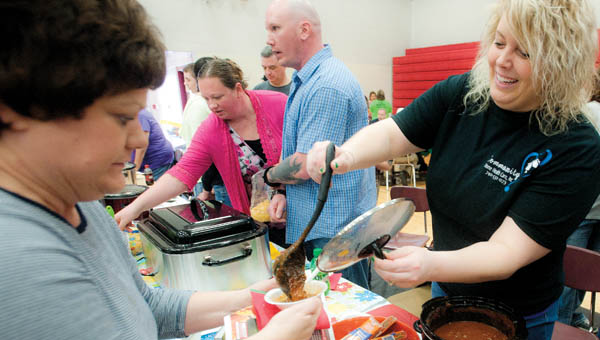 COAL GROVE — Twenty-four different kinds of chili were featured at this year’s Lawrence County Board of Developmental Disabilities Chili Fest and Craft Show for DD Awareness, the 17th year of the event.

“The event started in the Open Door School gym, but we eventually outgrew that,” Tim Nunnery, personnel director of the board, said. “It was brought to Dawson-Bryant High School and they’ve been kind enough to host it here.”

Nunnery said money raised at the event goes to an fund for DD awareness.

As chili lovers from Lawrence County filed in and received their bowls and spoons at the door, the chili makers were out to prove theirs was the best.

“We decided on making a heart chili with turkey and that has very low sodium,” Laura Brown, of the Ironton Health Department, said of the department’s chili entry in the contest this year. “We usually make chili for this event. This is our fifth year.”

Ironton Lions Club president Lou Pyles said the club has participated in the event since 2010 or 2011, and that they always have a good time with it.

“It’s a good community event,” she said. “We really enjoy it”

The chili from Open Door School was made in the recently opened Jet Café, where Open Door principal Kendra Heim said the students make lunch for the staff every Friday.

“We just opened it in this spring,” she said. “We thought it would be a good idea for them to make the chili there.”

The three awards given out to the top chilis were the DD Families/Individuals/Staff Award, Business/Organization Award and People’s Choice Award. Judges for the chili fest were Bill Cornwell, Brett Looney, of the Lawrence County Juvenile Center and the three Lawrence County Commissioners, Bill Pratt, Freddie Hayes, Jr. and Les Boggs.

“I think it’s a great event that brings awareness to those who may not ordinarily have contact with DD,” Boggs said.

“This event is designed to increase positive awareness of the people we serve and the programs we provide,” Paul Mollett, superintendent of the board, said in a statement. “I would like to thank the staff and community volunteers for their efforts to make this a fun, family-oriented event.”