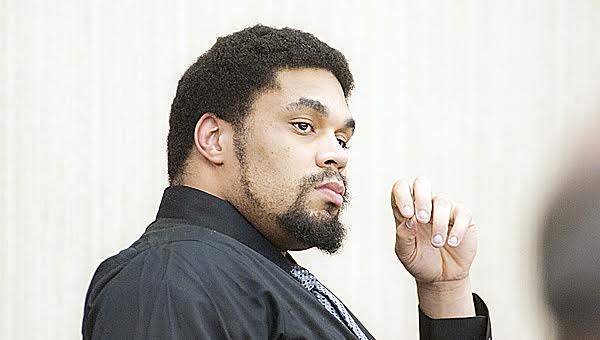 Justin Wilson was found guilty of aggravated murder and tampering with evidence by a jury Thursday afternoon.

A murder trial that began on Monday in Lawrence County Common Pleas Court finally came to an end Thursday afternoon, when a jury found defendant Justin Wilson guilty of aggravated murder and tampering with evidence.

Wilson was found guilty for the murder of 30-year-old Justin Adams, who was shot in the face from close range as a result of a robbery gone badly in January of last year at 37 Township Road 616 in South Point.

According to the prosecution, one of the co-defendants in the case, Nicole Eller, and the other co-defendant, Derrick Rice, conspired to rob Adams of cash and drugs on Jan. 13, 2015. Rice enlisted the help of Wilson, who brought the 9mm gun. When Adams wouldn’t give up the money and drugs, Wilson became violent, pistol whipped Adams in the head and threw him on the couch, where he was shot in the left eye and killed.

Day four of the trial on Thursday brought closing arguments, where defense attorney Gene Meadows argued that there were holes in the case that create doubt that Wilson killed Adams. He said that the state knew Wilson from previous incidents and went after him without finding any evidence other than what was said in testimony, conflicting testimony of Eller saying she never saw Wilson before the night of the shooting and Rice saying that he saw Eller, Wilson and Adams together earlier in the day, not going after any other suspects or investigating anyone else involved, not sending the clothing Rice and Eller were wearing the night of the shooting for testing, not testing Eller or Adams for DNA and times of people leaving the crime scene not tracked in the crime scene log, only those who came in.

However, it wasn’t enough to swing the jury from the prosecution, where Lawrence County prosecuting attorney Brigham Anderson said there were no other suspects in the case and matched the phone records with the testimony given by Rice and Eller within the timeframe of the shooting. In Bailey’s testimony, she said that Wilson was jittery after arriving back at her house, after the shooting, and that he told her he had shot someone in the face and was ‘going away for a long time.’

Thompson, who drove Wilson to Huntington from Bailey’s house sometime after the shooting, testified that she heard Wilson talking on the phone during the cab ride and said that she heard him say that he did something really bad, but didn’t want to talk about it on the phone.

“Wilson’s cell phone records matched up with all of the testimony,” Anderson said. “There’s no doubt he’s guilty on all charges.”

Meadows argued that at the same time Eller called 911 after the shooting, Rice called Wilson, although they supposedly left together based on previous testimony heard. However, Anderson said that Rice and Wilson went separate ways when they left the scene following the shooting, which matches what Wilson described on an audio recording of a conversation involving Wilson and Lawrence County sheriff’s detectives as how he left the scene, where Anderson said he eventually ended up at Bailey’s house. The two-hour plus long audio recording starts with Wilson getting picked up by Lawrence County sheriff’s detectives from a jail in West Virginia and extradited back to Lawrence County, stopping at the crime scene before arriving at the jail. In the recording, Wilson tells several different stories as to what happened, including blindly shooting the gun as he was running out, that he was protecting himself from a knife he said Adams was threatening him with, that he gave the gun to Rice, who had his own bullets and killed Adams and that he already left the house and then heard a gunshot. But he remained adamant that he didn’t kill Adams the whole time.

Thompson dropped Wilson off in an alley in Huntington, where Anderson said he went to a friend’s house to think about the situation and “figure everything out.” Wilson was arrested by marshals, but approximately two weeks following the shooting. Anderson pointed out that when Wilson was arrested, he had tried to change his appearance.

The gun used and the wallet of Adams that was taken were never found. Wilson admitted getting rid of the gun on the audio recording, because he was crossing state lines. The missing pieces of evidence make up Wilson’s tampering with evidence charge.

Ironton High School student Hannah Tussey stands next to her doghouse and in character as Nana in the production of... read more