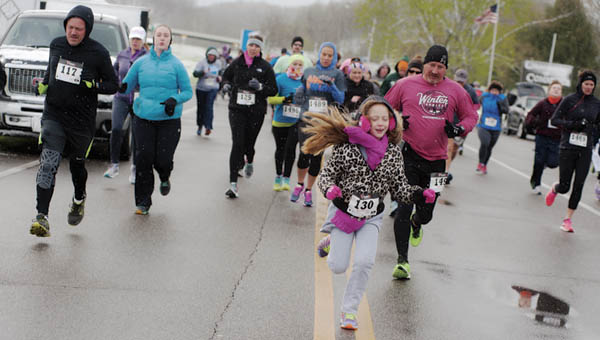 Runners take off at the start of the Sixth Annual 5K for Developmental Disabilities Awareness at The Point industrial park on Saturday morning.

Snow and freezing temperatures were no match for those who participated in the sixth annual 5K for Developmental Disabilities Awareness at The Point industrial park Saturday morning.

“We had over 100 pre-registered. We scheduled this two months in advance,” Tim Nunnery, public relations and personnel director of the Lawrence County Board of Developmental Disabilities, said. “Last year we had to move it because of weather, so this year we went in with the mindset to do it in April expecting better weather. Being our luck, it turned out to be the coldest day on record. But still, I’m pretty impressed by the turnout.”

Sixty-two participants braved the cold to run in the race.

Finishing first for the women and second overall with a time of 25:24.2 was Laura Kuhn, 40, of Coal Grove, who said she’s been running 5Ks consistently for three years.

“It’s good for you and it’s fun. The community of runners is always supportive and everyone cheers each other on,” she said. “I try to run one per month to keep me motivated. This is the first time I’ve ever finished first.”

For Chesapeake resident Dallas Tibbs, 26, who finished as the ninth overall male and 18th place overall with a time of 31:21.1, the event was his first 5K.

Tibbs said he trained leading up to the race, losing 25 pounds since January.

“This is a big deal for everyone involved and it’s for a good cause,” he said, talking about raising awareness for developmental disabilities. “Everyone is affected by it in some way. I have cousins and friends affected by it.”

Tri-State Racer hosted the event, and portions of all proceeds go toward developmental disabilities programs.

Nunnery said the event will continue for a seventh year in 2017.