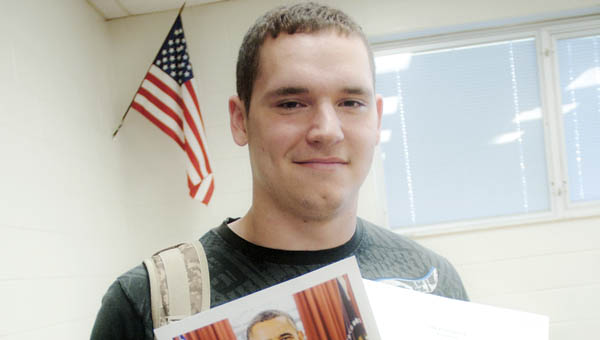 “I wrote a letter to President Obama that I didn’t agree with his gun laws and that I was going to enlist in the Marine Corps,” he said. “I didn’t want to go into a trap or plan that wasn’t planned out correctly by our government.”

Johnson said regarding President Obama’s gun laws, he felt as if they were taking away a right.

“It’s like taking away our protection of friends and family,” he said. “In the letter, Obama said how chaos is breaking out in failing states, causing things like the San Bernadino killers inspiring more violence.”

Regarding the fight against ISIL, Johnson said he was satisfied with the president’s response.

“Basically, he told me what the government has done and plans to do in the near future to defeat ISIL. After 9/11, he felt he attacked ISIL pretty hard with air strikes, including the 101st airborne, and he plans to send out forces,” Johnson said. “He said he was doing everything he can to stop ISIL, including working with other countries in the 65 European allies. I feel like he answered my question pretty thorough and gave me a clear understanding of what he plans to do.”

Johnson said joining the military has always been a goal of his since he was a child, growing up in a military family.

“My family’s been in the military business for a while,” he said. “When I’m in the Marines, I’m going to be going to Norwich University to study criminal justice. I want to eventually be a state patrolman.”

President Obama’s response to Johnson came when American government teacher Monica Mahlmeister said her class was learning how to contact members of the government.

“We’ve been trying to practice contacting members of government, how to contact and who to contact,” Mahlmeister said.

“The class got back a generic group letter, but Chase got his separate. The group got a response about three weeks ago, and Chase just got his letter today (Tuesday).”

Johnson, who also serves as the junior class president, said he was surprised to receive a response from the president.

“I was shocked. I really wasn’t expecting a huge letter to come back from him,” he said. “It was ironic having the president write a letter to the junior class president.”

‘Into the Woods Jr.’ premieres Friday at Fairland High School