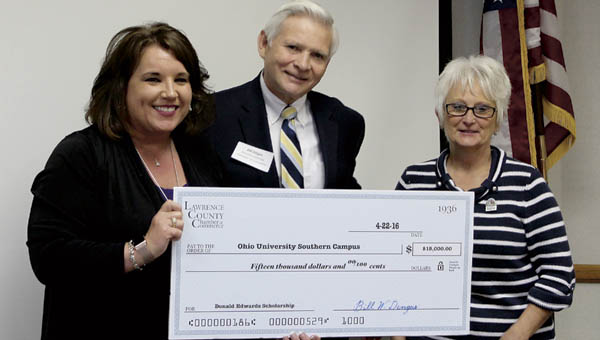 Ohio University Southern dean Nicole Pennington was the guest speaker at the Lawrence County Chamber of Commerce April fourth Friday luncheon at OUS in Ironton, giving an update on programs and things going on at the university.

Pennington talked about the school’s mission and values before going over the five-year strategic goals, which include to increase enrollment, retention, course completion and graduate rates, enhance campus environment and culture and cultivate new partnerships and revenue streams. She spotlighted the nursing program, which is set to graduate its first BSN class of 18 graduates, and several students and faculty members who have been honored in some way. Pennington continued by giving updates on enrollment, admission, personnel, budget, facilities, campus initiatives and funding priorities.

A check for $15,000 from the Festival of Trees at the Ohio University Southern Proctorville Center in November was then presented to Pennington by Bill Dingus, executive director of the Lawrence Economic Development Corporation, and Sandy Blackburn, chair for the festival of trees, for the endowed Don Edwards Scholarship.

In honor of the Lawrence County bicentennial this year, commemorative pins and wooden nickels were handed out at the luncheon as well.